In search results, Rumble pushes twice as many sites rated untrustworthy by NewsGuard as YouTube

“I just know that they’re going to engage in massive election fraud,” Jones responded during an Oct. 15, 2022, interview on Bannon’s video podcast, referring to Democrats’ supposed plan to steal this year’s election. “[In 2020] they tried to steal Texas, they tried to steal Florida, but if you watched, they were ahead until they ran out of fake votes and then the Republicans won in Texas and in Florida and other key states. In some states, they probably have enough names of dead people or folks that have moved out of the state to still try to steal it.”

Jones’ declarations of widespread voter fraud are baseless, but they are widespread on Rumble, a video-sharing platform launched in 2013 that bills itself as an alternative to what it calls “high censorship” technology platforms, such as YouTube.

Indeed, a NewsGuard investigation found that in its search results, Rumble frequently pushes videos from untrustworthy sources that traffic in election misinformation. When NewsGuard conducted a series of Rumble searches related to the 2022 midterm elections, nearly half of the search results — 47.5 percent, or 95 out of 200 — came from sources rated Red by NewsGuard for being untrustworthy.

At the same time, just 19 percent of the results for the same searches — 38 out of 200 — on YouTube came from sites rated Red by NewsGuard. (See chart at the bottom of this article.) 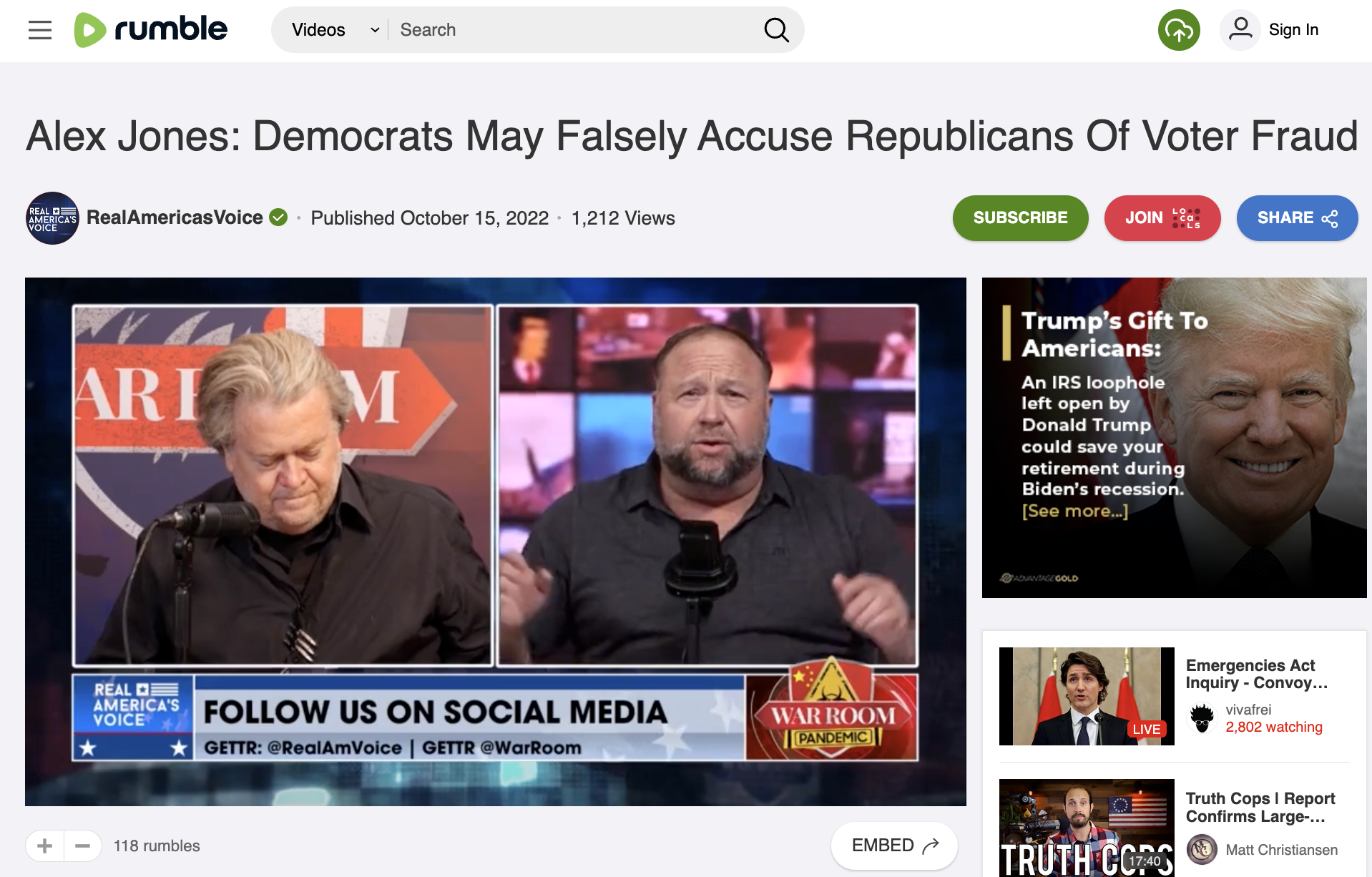 In October 2022, NewsGuard analyzed news sources linked to a total of 400 search results, 200 on Rumble and 200 on YouTube, using 20 search terms referencing candidates in major races — such as Pennsylvania Senate candidates Democrat John Fetterman and Republican Mehmet Oz. Other searches were based on topics in the news, including abortion, crime, and inflation.

NewsGuard rates sources that get below 60 points Red and posts a warning to news consumers that the source fails to follow basic journalistic practices. NewsGuard employs a team of journalists to review and rate news and information websites using nine criteria. Based on a site’s performance on these nine weighted criteria, with the points for adding up to 100, the site is assigned a Red or Green rating and score of zero to 100 points.

The Rumble search results yielded 95 videos from Red-rated sites. These videos collectively were viewed 8.9 million times as of Oct. 28, 2022.

Rumble promotes some of these Red-rated accounts, which regularly skew conservative, in the Featured Channels section of its main menu. Three accounts — Bannon’s “War Room,” “The Dan Bongino Show,” and “Louder With Crowder” — have a combined 4.2 million subscribers on Rumble, and their videos regularly accrue thousands — if not hundreds of thousands — of views.

NewsGuard sent two emails and left a phone message with Rumble in November 2022, asking about its prioritization of search results tied to Red-rated websites and its handling of misinformation, but did not receive a response. 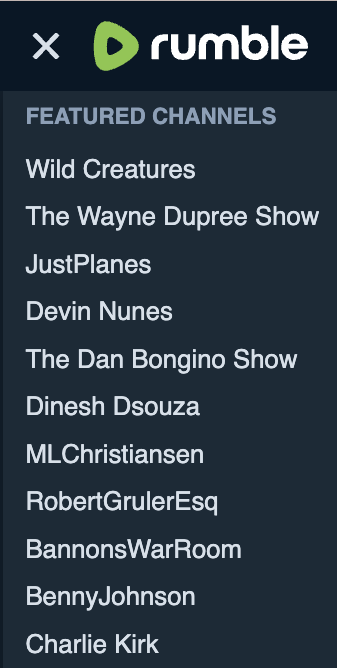 ‘This is how they steal it’

As was the case with the Steve Bannon video of the Alex Jones interview, the search results from Red-rated sites that NewsGuard analysts got on Rumble regularly advanced false and misleading claims about voter fraud and the 2020 election, demonstrating the persistence of these debunked allegations.

For example, the fourth result shown to a NewsGuard analyst who searched for the phrase “U.S. midterm elections” was a video posted by Conservative-Daily.com, a Red-rated site with a trust score of 7.5. In the video, Ashe Epp, co-host of the Conservative-Daily podcast, criticized Democratic Arizona gubernatorial candidate Katie Hobbs for overseeing what Epp called a “stolen” 2020 election in her position as Arizona’s secretary of state. “She is a prominent fraud denier,” Epp said. 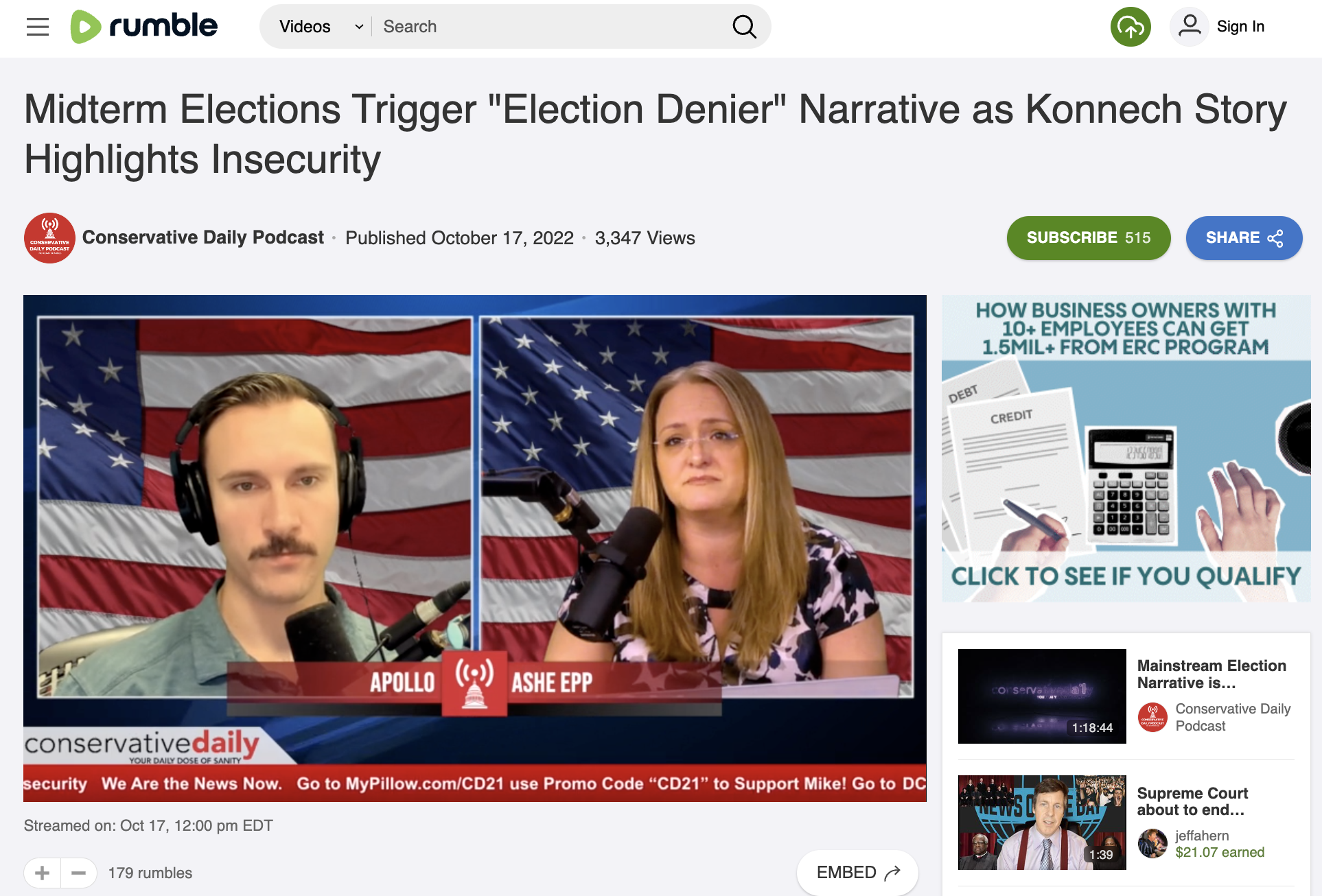 The sixth result for the same search was a video posted by Bannon’s “War Room” titled “Midterm Election Fraud Has To Be Taken More Seriously.” WarRoom.org has a NewsGuard score of 0. In the clip, Bannon interviewed Pennsylvania Republican poll watchers Gregory Stenstrom and Leah Hoopes, who recently co-authored a book claiming that the 2020 election was stolen titled “The Parallel Election: A Blueprint for Deception.”

“Mail-in ballots…This is how they steal it, right?,” Bannon said, referring to the 2022 midterm election, before asking Stenstrom to “Walk through how [the 2020] election was stolen, sir.” Stenstrom claimed that in Delaware County, Pennsylvania, Democrats “inserted” and “infused” hundreds of thousands of fake ballots to skew the 2020 results in favor of then-candidate Joe Biden. There is no evidence that the 2020 election was “stolen,” with top election officials in all 50 states having affirmed the integrity of the election, according to The New York Times, and numerous federal officials, including former U.S. President Donald Trump’s attorney general, Bill Barr and independent observers having reached the same conclusion. 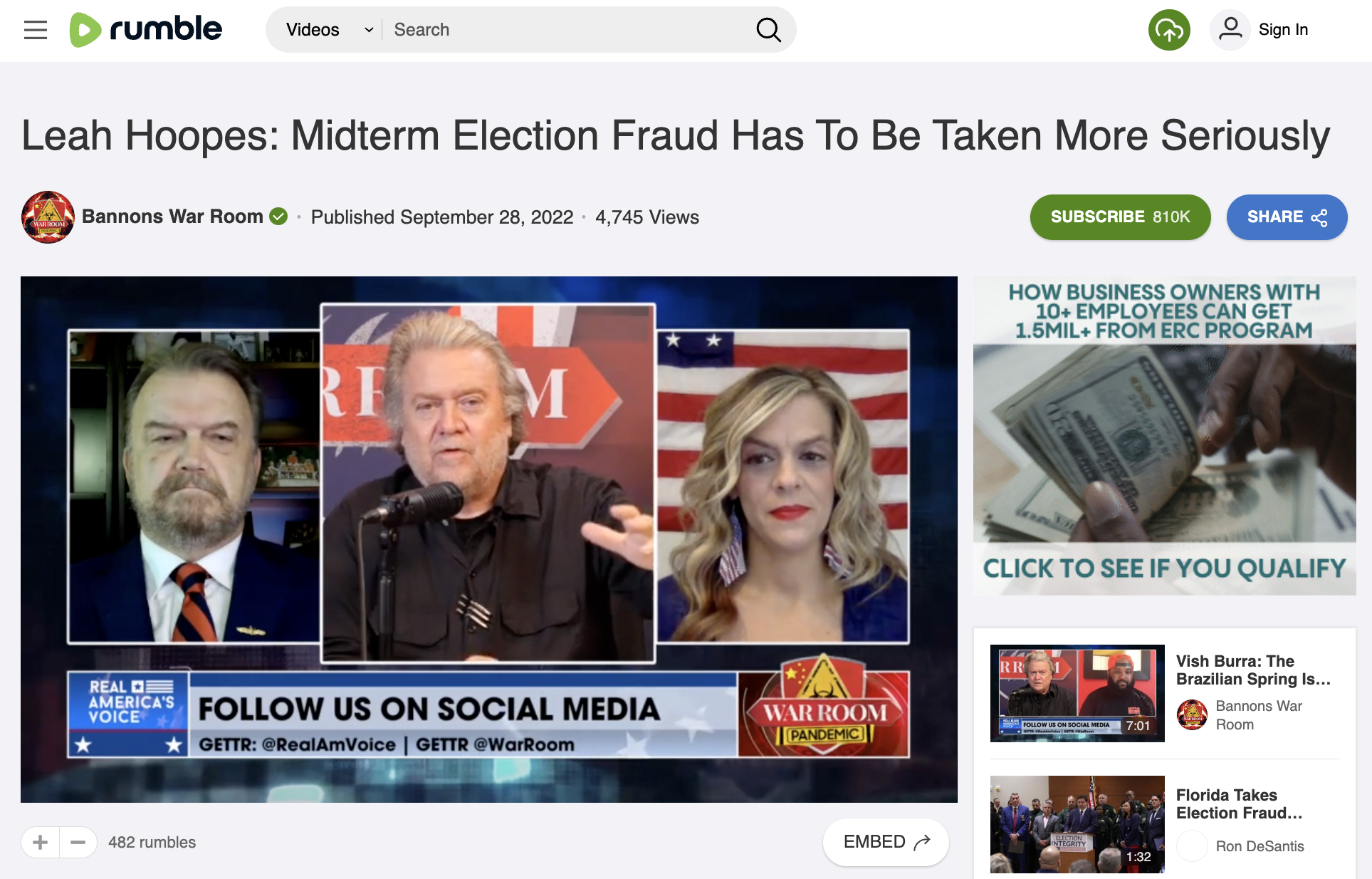 On this September 2022 episode of "War Room," Steve Bannon asks Gregory Stenstrom, a Pennsylvania Republican poll watcher, to "Walk through how [the 2020] election was stolen" (Screenshot via NewsGuard)

During NewsGuard’s Rumble search project, analysts were fed more videos posted by accounts tied to “War Room” host Bannon and to Dan Bongino, another conservative commentator who hosts a podcast called “The Dan Bongino Show,” than by any other account. YouTube previously banned both commentators for violating its standards.

Twenty-two of the 200 Rumble search results (11 percent) were published by the Rumble account for Bannon’s “War Room” podcast.

YouTube banned the “War Room” account on its platform in January 2021, telling The Wrap that month that the podcast had “repeatedly violat[ed] our Community Guidelines.”

Another 17 Rumble search results were videos published by accounts tied to Bongino, an early Rumble investor. Bongino’s website, Bongino.com, is Red-rated by NewsGuard, receiving a score of 49.5. YouTube told The New York Times in January 2022 that it banned Bongino, and said his accounts were posting videos disputing the efficacy of masks and “circumventing our terms of service by posting a video while there was [a]…suspension associated with the account.”

Two videos were posted by “The Charlie Kirk Show” and included claims about the Jan. 6, 2021, attack on the U.S. Capitol and the August 2022 FBI search of Trump’s Mar-a-Lago resort. Kirk’s podcast airs on Real America’s Voice. Kirk’s website, CharlieKirk.com, has a NewsGuard score of 0.

One video was titled “J6 Pelosi Tape Drop and VA Dems Lose Their Gender Affirming Minds | Mark Finchem, Julie Kelly, AMA” and was the ninth result when a NewsGuard analyst searched for “Mark Kelly,” the Democratic senator seeking re-election in Arizona. In the video, posted on Oct. 14, 2022, Kirk interviewed Julie Kelly, a writer for American Greatness, a conservative blog that is Red-rated by NewsGuard with a trust score of 42. In the clip, Julie Kelly referred to the attack as an “inside job … a massive stunt, a massive entrapment operation to draw these Trump supporters there.”

There is no evidence that federal agents helped plan or participated in the attack on the U.S. Capitol or that Trump supporters were “entrapped.” Video footage from throughout the attack shows that the rioters climbed scaffolding, busted doors, smashed windows, and shoved past barricades to get into the Capitol. Some attacked police officers in the process. Images captured that day depict numerous rioters inside the Capitol wearing clothing with pro-Trump wording.

The sixth-highest result shown to NewsGuard when an analyst searched for “Blake Masters,” the Republican running to unseat Mark Kelly, was an August 2022 episode of “The Charlie Kirk Show” titled “Exposing Garland’s Deep State Cabal + Kari Lake & Blake Masters.” While discussing the execution of a search warrant at former President Trump’s Mar-a-Lago estate near the start of the episode, Kirk said: “Barack Obama has boxes of National Archive records at Martha’s Vineyard.”

For example, four of the top 10 results returned when a NewsGuard analyst searched for the term “U.S. Midterm Elections” were posted by fringe accounts advancing the QAnon conspiracy. QAnon supporters contend that Trump and an anonymous government operative who goes by the name “Q” are engaged in a struggle to take down a “deep state” network of child sex traffickers.

The first “U.S. Midterm Elections” search result was posted by @QNewsPatriot, a QAnon influencer who posted a video on Oct. 7, 2022, that declared, “Supreme Court Cancels USA Midterm Elections.” The video’s narrator said: “The information that I was given today, October the 7th, 2022, is that the Supreme Court of the United States has canceled the November midterm election. Those elections will not happen.” The Supreme Court has not canceled the 2022 midterms and they are, indeed, slated to occur. Even so, the video had been viewed over 176,000 times as of October 2022. 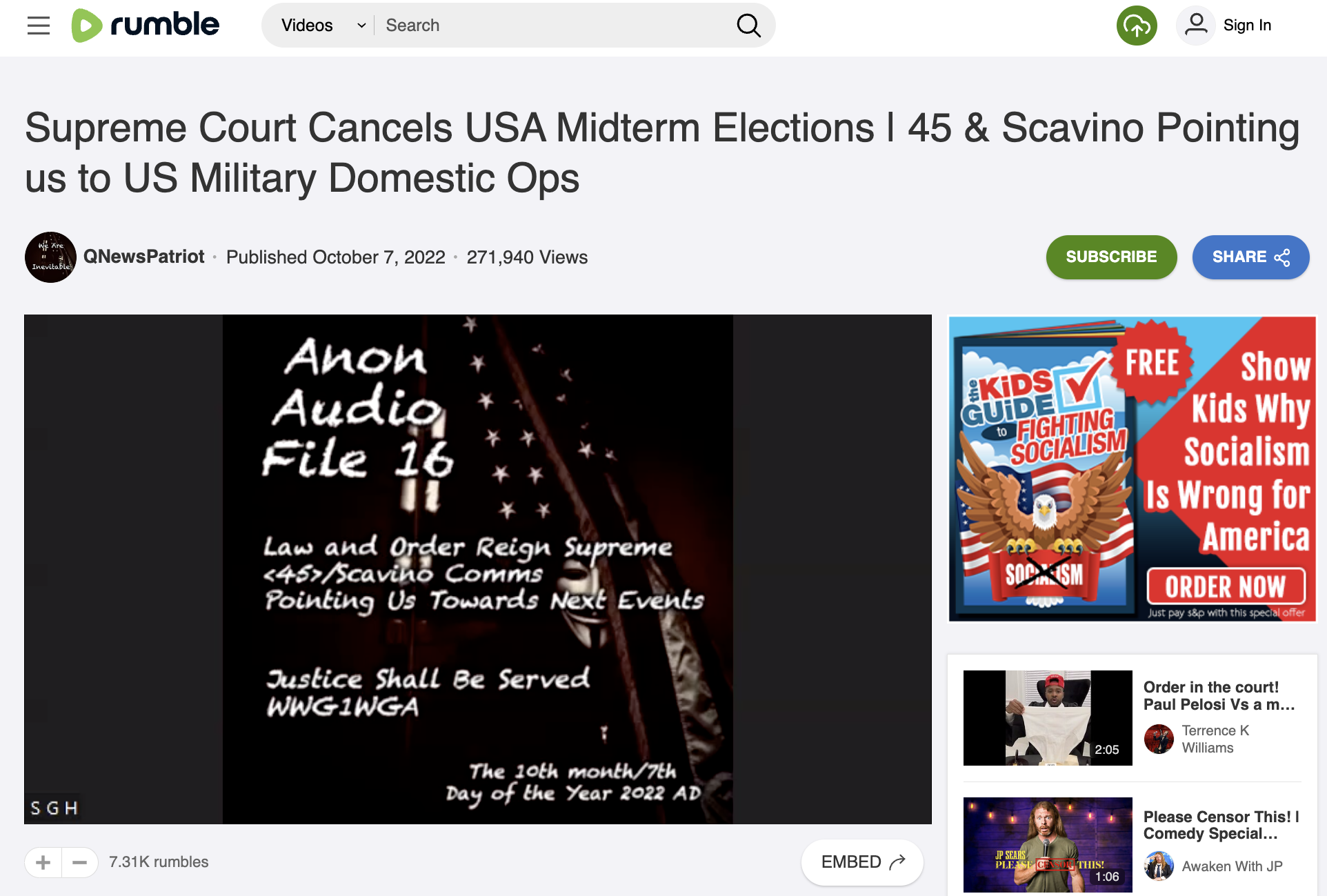 The ninth “U.S. Midterm Elections” result, posted by a Rumble user who goes by the name @QTeam on the platform, featured an October 2022 video of Julie Green, a self-proclaimed “prophet” who recently appeared at a campaign rally for Doug Mastriano, the 2022 Pennsylvania Republican gubernatorial candidate. In the video, Green, who once baselessly claimed House Speaker Nancy Pelosi “loves to drink the little children’s blood,” said, “Fornicators, this word will be in your news. Someone well known will be accused of this … No more will the elite hide. No more will Hollywood rats hide. No more will the deep state hide in their dark places, living their lives full of sin and corruption.”

None of the 200 top YouTube search results analyzed by NewsGuard contained videos produced by a QAnon source. Indeed, in October 2020, YouTube cracked down on QAnon, stating that it was barring “content that threatens or harasses someone by suggesting they are complicit” in a conspiracy.

In October 2022, two NewsGuard analysts based in the United States ran 20 searches on YouTube and Rumble using the terms and candidates’ names listed below. To ensure that results were not curated to be affected by users’ previous activity, analysts ran Rumble and YouTube searches using a privacy browser tab. The NewsGuard journalists analyzed the top 10 results and saved each video link. Website ratings are as of October 2022.

Search terms, with the number of Red-rated sources among the top 10 results that were returned in those results: