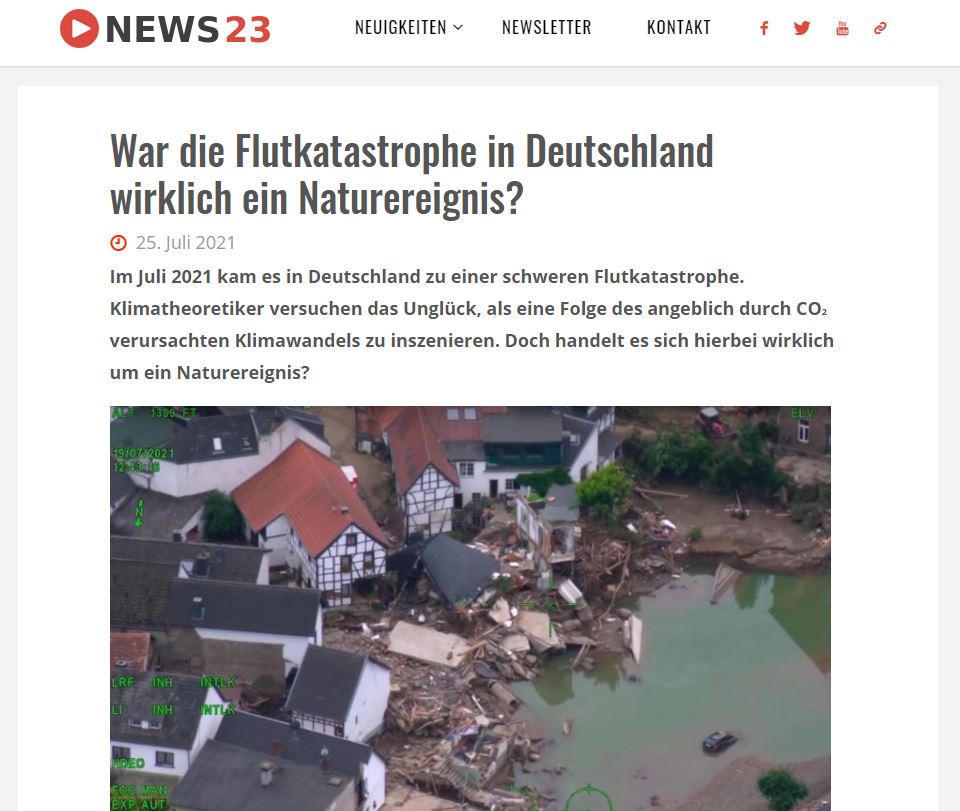 “Was the flood disaster in Germany really a natural event?” (Screenshot via NewsGuard)

With less than a month until Germany elects a new government, misinformation about the upcoming election, the Bundestagswahl, has run rife on social media in Germany and has found a niche in predominantly right-leaning corners of the internet.

Breaking it down: While the Green party continues to be the main target of misinformation, the recent floods in Germany have brought about new election misinformation narratives about supposed wrongdoing during the disasters, including far-fetched claims that the floods were entirely orchestrated for political reasons. This development has come with an increase in claims against the Christian Democratic Union party’s chancellor candidate, Armin Laschet. In its newly-launched German Election Misinformation Tracker, NewsGuard has documented five false narratives surrounding the floods in Germany ⁠— four of which single out Laschet.

In addition, NewsGuard has found 16 false claims and made-up quotes circulating about the Green party and its politicians, including from Russian propaganda sites. Indeed, a mid-June 2021 confidential report by Germany’s Federal Ministry of the Interior, first disclosed by Berlin-based newspaper Der Tagesspiegel, warned of a Russian propaganda attack against the Green party candidate, Annalena Baerbock. NewsGuard also found 12 false claims about the Union parties (comprised of the Christian Democratic Union and the Christian Social Union, CDU and CSU) and six about the Social Democratic Party of Germany (SPD). NewsGuard has not found any false claims so far about the Left party, the center-right Free Democratic Party (FDP), or the far-right Alternative for Germany party (AfD).

Floods in western parts of Germany in July 2021 have become a catalyst for election misinformation, spread predominantly by right-wing sites.

Right-wing and Russian propaganda sites also continue to promote misinformation targeting the Green party, especially the party’s chancellor candidate, Annalena Baerbock. Prominent narratives include the claim that Baerbock is a “puppet” of both Klaus Schwab, the founder and head of the World Economic Forum, and of U.S. Democratic mega donor George Soros. Schwab and Soros are often referred to on such websites as “the financial elite.” 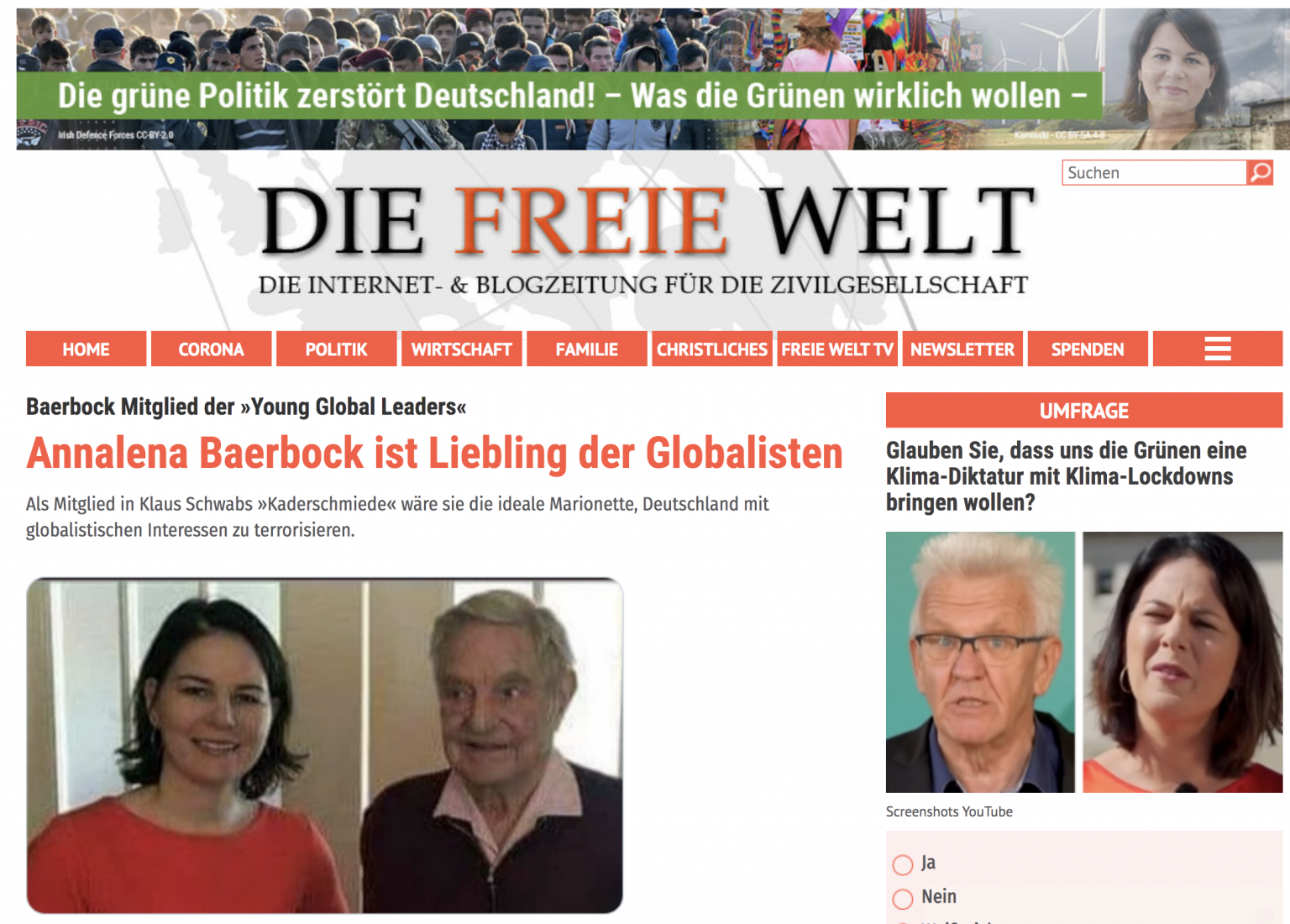 FreieWelt.net, a site run by a nonprofit founded by Beatrix von Storch, deputy federal spokeswoman of Germany’s major far-right AfD party, is one of many German news sites spreading false and misleading claims about the Green party. (Screenshot via NewsGuard)

Other misinformation targeting the Green party emerged in a June 2021 opinion article on the Russian government-owned DE.RT.com (a NewsGuard Red-rated site), which picked up the debunked falsehood that Baerbock does not have any college degrees and that she lied about her education on her resume. The DE.RT.com article stated that Baerbock’s resume “was about as authentic as Hitler’s diaries.” (This is a reference to a German media scandal in which the magazine Stern purchased a 60-volume set of diaries in 1983 that supposedly belonged to Adolf Hitler for 9.3 million Deutsche Marks — $3.7 million — that later turned out to be forgeries.)

This article was shared on DE.RT.com’s official Facebook page, which had approximately 518,000 followers as of late June 2021, according to CrowdTangle.
A variation of this claim also appeared on the far-right, NewsGuard Red-rated site AnonymousNews.ru. The site, which is registered through a Moscow-based domain registry service, speculated in the headline of a May 2021 article: “Scandal in the Green Party: Did chancellor candidate Baerbock buy her university degrees?” This article was shared on AnonymousNews.ru’s official Facebook page, which had nearly 30,000 followers as of late June 2021, according to CrowdTangle.
Why we should care: The political climate in Germany has become charged in the lead-up to the federal election. Since the start of the pandemic, Germany has seen a rise in pandemic-related protests, and in 2020, it was the European country with the most resistance to government-mandated measures against the spread of COVID-19, according to multiple media reports. Although these protests found support across the German ideological spectrum, NewsGuard has found that they were largely fueled by misinformation from right-wing news sites about masks, tests, vaccines, and other COVID-related topics ⁠— a phenomenon that could happen again with the German federal election.

The August 2020 attempt by right-wing protesters to storm the Reichstag, Germany’s parliament building, set a worrying precedent. France, where presidential elections are scheduled for April 2022, is one of several European countries that over the coming months will be watching events in Germany unfold with concern.