Despite promises, Google and other ad platforms are still funding Russian disinformation

By Matt Skibinski with reporting from Alex Cadier and Eric Effron   |  March 7, 2022

When Russian President Vladimir Putin’s forces invaded Ukraine, tech platforms such as Google were quick to announce that they were taking seemingly decisive steps to cut the Kremlin’s disinformation machine from their platforms.

For example, Reuters reported that Google, the world’s largest programmatic advertising company, was “barring Russian state-funded media outlets from using its ad technology to generate revenue on their own websites and apps.” Other ad platforms and tech companies followed suit.

However, a new analysis by NewsGuard finds that, despite those statements, dozens of websites promoting Russian disinformation about the Ukraine war continue to receive advertising revenue from Google and other advertising companies. These include websites that hide their sources of funding and control, that are registered in countries such as Cyprus, or that are owned by business associates of Putin. These are part of the broader ecosystem of Russian disinformation where myths often originate on Kremlin-owned sites and are then spread by a network of sites repeating the myths.

NewsGuard’s team analyzed a set of 116 websites that it has found to be publishing disinformation about the war in Ukraine, including false claims described in NewsGuard’s new Russia-Ukraine Disinformation Tracking Center. These websites include official Russian state media sources, anonymous websites with a history of publishing Russian disinformation narratives, foundations, and research websites with uncertain funding — at least some of which may have undisclosed links to the Russian government. NewsGuard, which uses nine basic, apolitical criteria of journalistic practice to rate news and information websites, had rated all these sites Red for being generally untrustworthy before the Russia invasion of Ukraine.

The NewsGuard analysis found that more than two dozen of these sites promoting Russian disinformation were still displaying and earning revenues from advertisements, nearly two thirds of which were served by the largest ad platform, Google. Programmatic advertising is placed through algorithms, which means the advertisers whose display ads appear on these sites do not intend to support these sites, and their CEOs and CMOs are likely unaware that their ads are subsidizing Kremlin propaganda.

It appears that programmatic advertising from Western advertising platforms no longer appears on the websites of RT or Sputnik News, which are two well-known Russian-government funded and financed websites that were identified in recent days by officials of the European Union. That seems to be because digital platforms were asked to take steps to sanction these two sites. For example, Google no longer delivers programmatic ads on the Sputnik News sites, with the Russian ad tech company Yandex recently replacing Google.

However, NewsGuard’s analysis found that there are many other websites publishing Russian disinformation justifying the invasion of Ukraine that continue to profit from programmatic advertising delivered by American ad-tech providers.

Among those disinformation sites is Pravda.ru, which began in 1912 as the official printed newspaper of Communist Party of the Soviet Union. During the Cold War, Pravda was required to register as a foreign agent in the U.S. under the Foreign Agents Registration Act.

The Pravda newspaper continued until the collapse of the Soviet Union in 1991; it later relaunched as a digital news source. Today, Pravda.ru is operated by Vadim Gorshenin, a self-described Putin supporter who formerly worked for the Pravda newspaper.

Despite Pravda’s name — which translates to “truth” in English — NewsGuard’s rating and “Nutrition Label” for Pravda.ru identifies numerous instances of the site publishing false, pro-Russian disinformation, including false claims related to the invasion of Ukraine. The site scores just 7.5 out of 100 points on NewsGuard’s credibility rating system, as shown below: 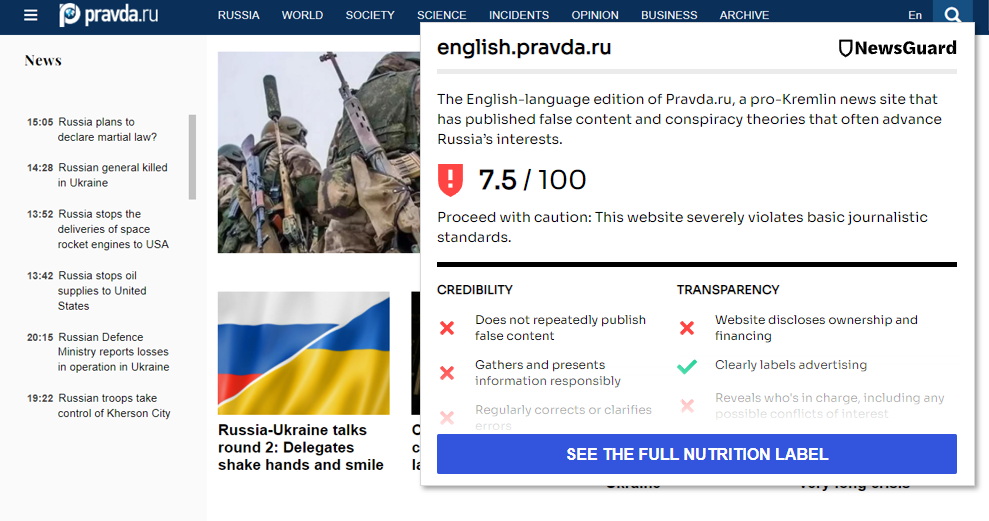 The homepage of Pravda.ru, a Russian website run by a Putin supporter that often promotes disinformation narratives, including about Ukraine. The site scores just 7.5 out of 100 on NewsGuard’s rating scale.

For example, an article published on Feb. 24, 2022, the day Russia began a full-scale invasion of Ukraine, claimed that the Ukrainian government was “illegal” and illegitimate. Another article published the same day described the Ukrainian government as “neo-nazis,” asking readers, “What was President Putin supposed to do? What was Russia supposed to do? Kowtow to neo-Nazi thugs?”

Those articles, which remain on the site today, each sit below large Google ad units stretching across the full width of the page, as shown below: 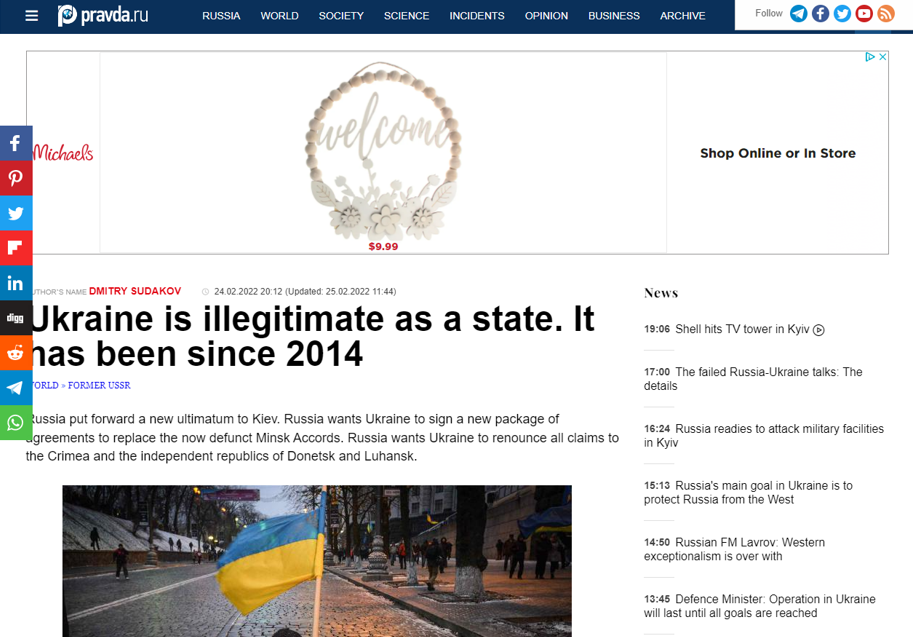 Screenshot of a Google ad unit on Pravda. The article shown here, published the day Russia invaded Ukraine, claims the Ukrainian government is illegal and illegitimate. 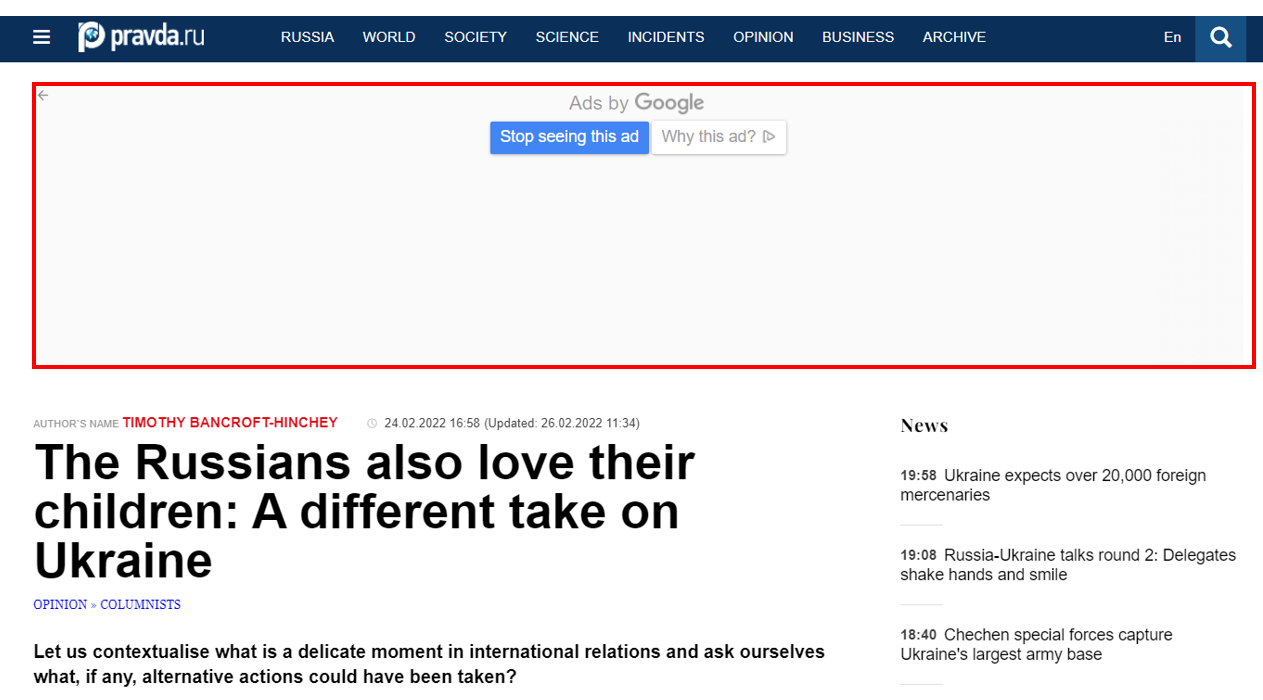 Clicking on the “About this Ad” icon of this ad unit on Pravda shows that it is being served by Google Ads. The article shown here advances the false claim that Ukraine’s leaders are Nazis, asking readers, “What was President Putin supposed to do? What was Russia supposed to do? Kowtow to neo-Nazi thugs?”

The claim that Ukraine’s government is controlled by Nazis is false. It apparently began spreading from Russian state media sources in 2014, with stories targeting the inner circle of former Ukrainian President Petro Poroshenko, and the current president, Volodymyr Zelensky, who is Jewish. The supposed rise of anti-Semitism in Ukraine was among Russia’s justifications for an invasion of Ukraine.

In fact, while far-right groups do exist in Ukraine and many other countries, they hold little political power in Ukraine. In the 2019 Ukrainian election, the presidential candidate for the far-right party, Svoboda, won just 1.6 percent of the vote. Parliamentary candidates from Svoboda won just 2.2 percent of the vote. Moreover, Jewish leaders in Ukraine have said that anti-Semitism in the country has been waning in recent years.

Prior to the current conflict, Pravda had published similar false claims in line with Russian propaganda narratives — such as the false claim that the Russian government was not involved in the 2018 poisoning of former Russian spy Sergei Skripal and his daughter, Yulia Skripal. That claim has been widely debunked.

Google did not respond to two emails requesting comment about its continued monetization of sites promoting Russian propaganda.

A broader problem for advertising platforms

Most ad platforms have clear policies about what kind of content they will monetize. Google’s Publisher Policies, for example, state that it will not advertise on content that contains “unreliable and harmful claims,” including content that “makes claims that are demonstrably false and could significantly undermine participation or trust in an electoral or democratic process.” Russian claims that the Ukrainian government is illegitimate and run by Nazis would certainly seem to violate this provision.

Similarly, Google’s prohibition against content that “misrepresents, misstates, or conceals information about the publisher, the content creator, the purpose of the content, or the content itself” would seem to ban monetization of propaganda outlets run by state actors that do not clearly disclose those ties.

The presence of programmatic ads on sites like Pravda — and the dozens of others identified by NewsGuard in the course of its analysis — suggest that current provisions put in place to enforce these policies by platforms such as Google have not been effective or have not been implemented. Google did not respond to two requests for comment on whether sites like Pravda, which promote Russian disinformation narratives, violate its publisher policies.

The misinformation challenge for ad tech platforms platforms extends well beyond the issue of state-sponsored disinformation. When COVID-19 began to spread — and along with it, misinformation about everything from alleged at-home cures to conspiracy theories that the pandemic was planned by global elites — NewsGuard reported that programmatic advertising from more than 4,000 brands inadvertently funded sites promoting COVID-19 misinformation. After the 2020 U.S. presidential election and before the Jan. 6, 2021, riot at the U.S. Capitol, more than 1,600 brands unintentionally similarly advertised on sites claiming that the election had been rigged. With the exception of a few sites sponsored by Russia and other malign state actors, all of these sites were privately controlled.

All told, misinformation sites rake in an estimated $2.6 billion in advertising revenue each year, according to a report by the media measurement company Comscore and NewsGuard.