WarTok: TikTok is feeding war disinformation to new users within minutes — even if they don’t search for Ukraine-related content

TikTok is feeding false and misleading content about the war in Ukraine to users within 40 minutes of their signing up to the app, regardless of whether they run any searches on the platform, an investigation by NewsGuard has found.

Moreover, NewsGuard found that searching for generic terms related to the conflict, like “Ukraine” or “Donbas,” led to TikTok suggesting multiple videos that contained disinformation in its top 20 results.

NewsGuard’s findings add to the body of evidence that TikTok’s lack of effective content labeling and moderation, coupled with its skill at pushing users to content that keeps them on the app, have made the platform fertile ground for the spread of disinformation. 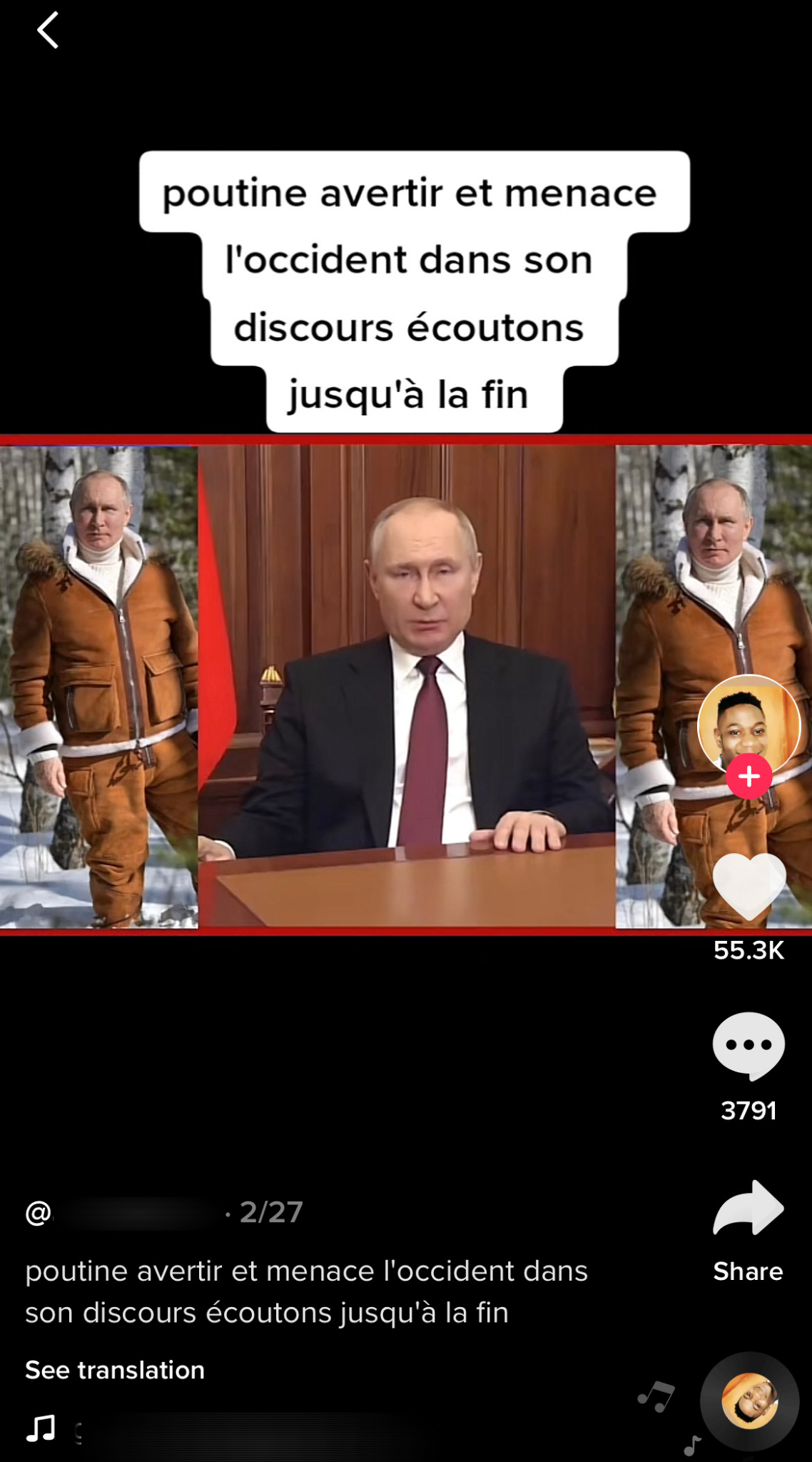 Within 29 minutes of joining TikTok, a French-speaking analyst was shown a video of a speech by Vladimir Putin claiming that “today’s neo-Nazis have taken power in Ukraine” and that responsibility for any bloodshed in the country lies with those in power in Ukraine. (Screenshot via NewsGuard)

In March 2022, a team of six NewsGuard analysts created new accounts on TikTok and ran two experiments designed to mimic normal usage of the app.  In the first experiment, analysts were instructed to scroll through TikTok’s personalized “For You” feed for 45 minutes, watching any videos relating to the Russia-Ukraine conflict in full, but not following any accounts or running any searches.

Within 40 minutes of joining TikTok, all of NewsGuard’s analysts were shown false or misleading content about the war in Ukraine.

Among these claims were both pro-Russian and pro-Ukraine falsehoods:

Falsehoods peddled by the Kremlin:

Some of the myths in the videos TikTok’s algorithm fed to analysts have previously been identified as Kremlin propaganda in NewsGuard’s Russia-Ukraine Disinformation Tracking Center.

For example, within 29 minutes of joining TikTok, a French-speaking analyst was shown a video of a speech by Vladimir Putin claiming that “today’s neo-Nazis have taken power in Ukraine” and that responsibility for any bloodshed in the country lies with those in power in Ukraine. As of March 14, 2022, this video had been viewed 1.7 million times and shared more than 15,000 times.

Within 36 minutes, the same analyst was shown a video, published on March 5, of a man claiming that “all the images of this pseudo-war are fake. There are no images coming out of Ukraine, even Russian Spetsnaz soldiers aren’t allowed to have smartphones to film anything – so all the images you seen in the media, are fake.”

Other videos painted a misleading picture of Ukrainian military dominance, including video-game footage purporting to show real-world images of a Ukrainian fighter jet, known as “the Ghost of Kyiv”, shooting down six Russian aircraft.

Toward the end of the 45–minute experiment, analysts’ feeds were almost exclusively populated with both accurate and false content related to the war in Ukraine — with no distinction made between disinformation and reliable sources.

At a time when false narratives about the Russia-Ukraine conflict are proliferating online, none of the videos fed to our analysts by TikTok’s algorithm contained any information about the trustworthiness of the source, warnings, fact-checks, or additional information that could empower users with reliable information. 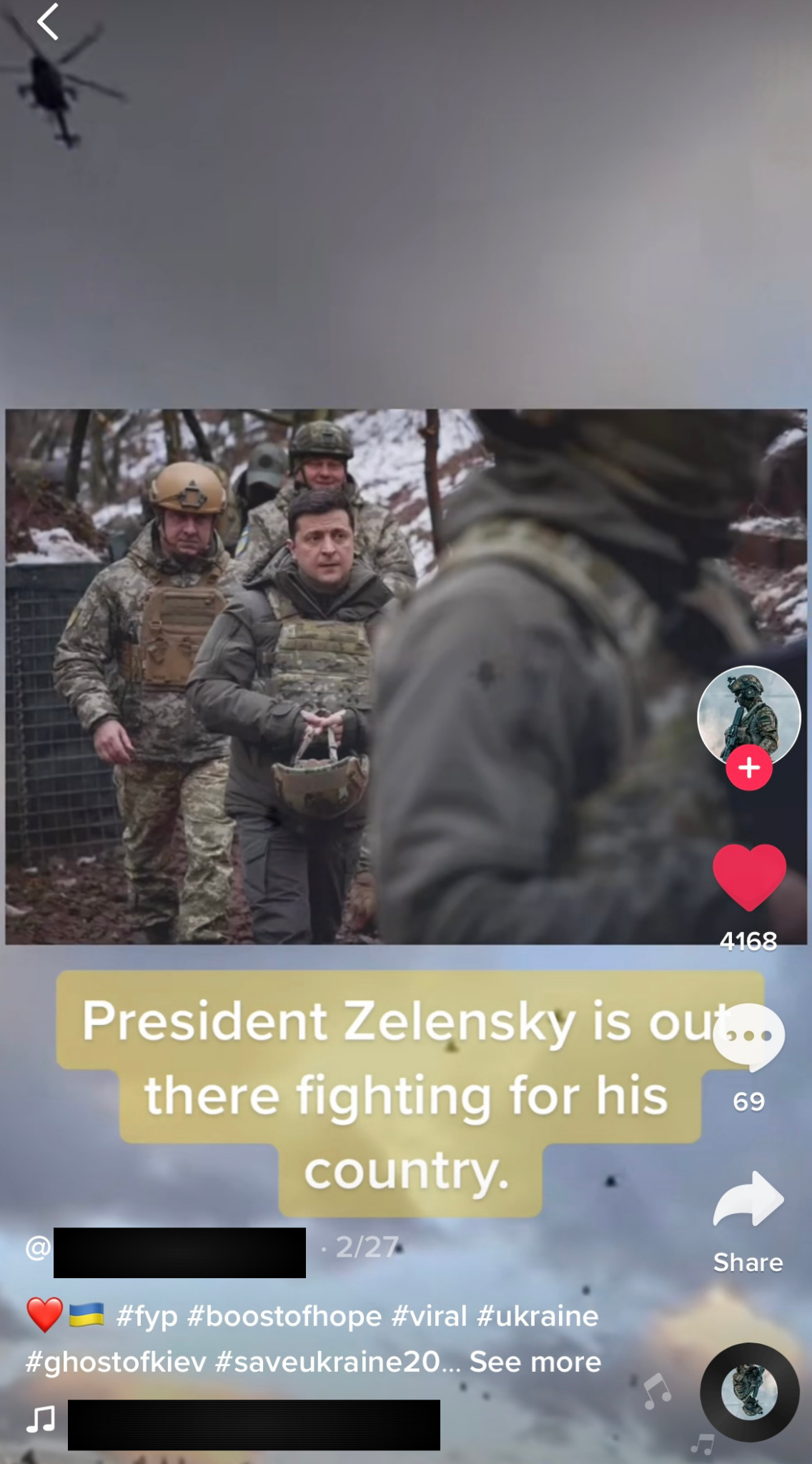 Footage shown to one NewsGuard analyst of President Zelensky “out there fighting for his country,” which was actually filmed in 2021. (Screenshot via NewsGuard)

The second experiment required NewsGuard’s analysts to search for generic terms that TikTok users looking to find information about the conflict might use. The search terms were: Ukraine, Russia, War, Kyiv, and Donbas.

TikTok’s search function suggested videos that contained false or misleading claims in the top 20 results when the analysts searched at least one of these terms.

For example, the second video of twenty in a search for “Ukraine” conducted by an Italian NewsGuard analyst brought up a video that carried the false claim, also peddled by the Kremlin, that the war in Ukraine was a result of a genocide in Donbas perpetrated by the Ukrainian authorities.

Searching for “Donbas” resulted in TikTok populating a U.S.-based analyst’s results with a video wrongly claiming that neo-Nazis are “everywhere” in Ukraine and that “the Ukrainian Government uses the neo-Nazi militias to maintain the control of Ukraine.” The video was the fifth suggested result.

In addition to the clear disinformation in TikTok’s search results, the platform also suggested reliable sources to NewsGuard’s analysts, including Sky News and The Telegraph.

While reliable sources tend to be “verified” on TikTok with a blue tick, their content still appears alongside other videos carrying Kremlin propaganda claims in the platforms’ search results, with no other distinction made between the two. In particular, TikTok does not include information about the trustworthiness of news sources on its platform.

Moreover, despite TikTok’s blocking of Russian state-backed propaganda channel RT from its platform, RT’s Editor-in-Chief, Margarita Simonyan, also carries the “verified” blue tick on her profile — which racked up 13.5 million views from 16 videos posted about the conflict in a week as reported by the Institute for Strategic Dialogue, a think-tank that studies extremism. 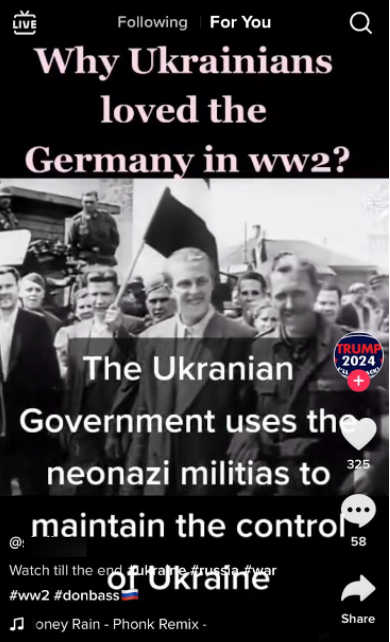 Searching for “Donbas” resulted in TikTok populating a U.S.-based analyst’s results with a video wrongly claiming that neo-Nazis are “everywhere” in Ukraine and that “the Ukrainian Government uses the neo-Nazi militias to maintain the control of Ukraine.” (Screenshot via NewsGuard)
Get NewsGuard

TikTok continues to be fertile ground for dangerous disinformation, fed to a young audience

TikTok has had a meteoric surge in popularity since its launch in 2017. In late 2021, the app celebrated attracting more than 1 billion monthly active users—up from 85 million at the start of 2018—making it the first non-Facebook app to reach that milestone.

According to Statista, a quarter of the app’s users in the U. S. in 2021 were between the ages of 10 and 19—despite TikTok’s claim that it  limits the use of its app to children over 13. Bloomberg has reported that approximately 30 percent of French TikTok users are under 18, as are a third of Italian users and nearly one-quarter of German users.

Despite being owned and operated by ByteDance, a Chinese internet conglomerate partially owned by the Chinese government, TikTok is not available in China. Instead, Chinese users can access Douyin, a near-identical service which forbids “politically sensitive” content, according to the University of Toronto’s Citizen Lab.

TikTok has also been accused of censoring content that does not align with the Chinese government’s views. For example, in 2019, leaked internal TikTok documents showed that the platform censored content relating to Tiananmen Square, Tibetan independence, and other sensitive issues.

With the Chinese government’s ambiguous alignment with Russia regarding the invasion of Ukraine, and certain Chinese state-backed sites uncritically repeating Kremlin propaganda, it remains unclear whether the platform’s ownership by the Chinese will affect Russia-Ukraine content decisions made by TikTok in the coming weeks and months. 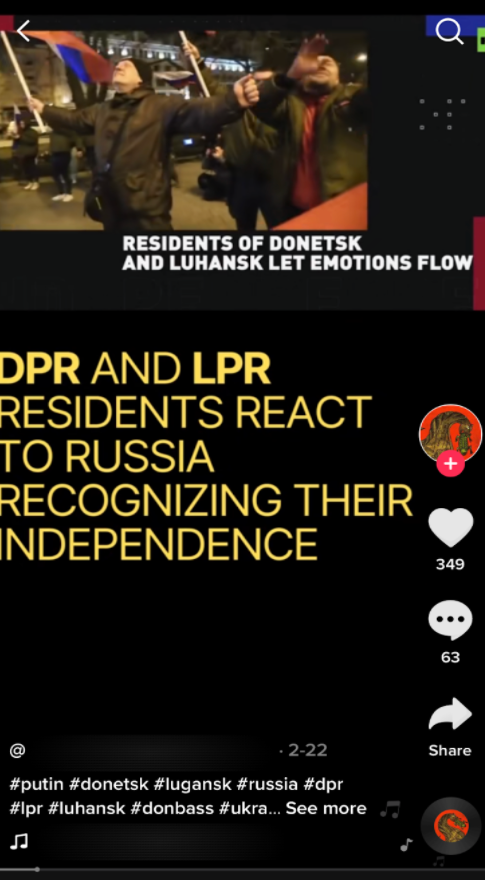 Despite TikTok’s blocking of Russian state-backed propaganda channel RT from its platform, footage from the network continues to be posted on the app. (Screenshot via NewsGuard)

Six NewsGuard analysts located in Switzerland, Italy, Germany, the U. S. and the U.K., deleted and installed TikTok and created new accounts.

Without following any accounts or running any searches, they scrolled through TikTok’s “For You” feed. Analysts were instructed to stop and watch Ukraine-Russia related videos in full. All of the videos mentioned in the scroll section of this experiment were suggested to analysts by TikTok’s recommendation algorithm.

Five NewsGuard analysts ran searches using the search terms mentioned in the search section of this experiment. Analysts deleted and reinstalled TikTok and created new accounts for each search. The results were found using screen recordings of each search.