NewsGuard found that TikTok hosts hundreds of videos using violence and music to celebrate the Wagner Group, a notorious Russian mercenary outfit. These videos have been viewed more than 1 billion times.

By Eva Maitland and Madeline Roache

“I woke up in this basement, where they told me I would face judgment,” the man in the video says gravely, his head stuck to a brick wall by several layers of tape around his neck and forehead. A soldier then swings a sledgehammer toward his head, just as the camera goes dark.

This chilling video, appearing to show the October 2022 execution of Yevgeny Nuzhin, a former Russian mercenary who had switched sides, is one of 160 clips NewsGuard analysts discovered circulating on TikTok depicting or alluding to violence apparently carried out by a private Russian militia called the Wagner Group. Nuzhin told Ukrainian media in September 2022 that he had been recruited to the Wagner Group while serving time in prison in Russia but later switched sides to support Ukraine.

The Wagner Group, also known as Wagner PMC (Private Military Company), first came to public attention in 2014 in eastern Ukraine during the conflict between the Ukrainian army and Russian-backed separatists. Yevgeny Prigozhin, a Russian oligarch and close ally of Russian President Vladimir Putin’s, acknowledged in September 2022 that he owned the Wagner Group, after years of denying his links to the organization. The Wagner Group is known for its ruthlessness and use of irony, referring to the group as an “orchestra,” its fighters as “musicians,” and war as a “concert.”

In recent months, Wagner mercenaries have been fighting alongside the Russian army in Ukraine in the battle to establish control over strategic targets and territory in the eastern portion of the country. In August 2022, British military intelligence said that Wagner played a role in the capture of Ukraine’s second–largest power plant in the eastern region of Donetsk.

NewsGuard identified 160 videos on TikTok that allude to, show, or glorify acts of violence carried out by the Wagner Group, including 14 that appear to show the execution of Nuzhin, the former Russian mercenary. Content promoting the Wagner Group on TikTok has been viewed more than 1 billion times, NewsGuard found. TikTok is owned and operated by ByteDance, a Chinese internet conglomerate partially owned by the Chinese government. Despite being owned by a Chinese company, TikTok is banned in China, even as its influence spreads across Western democracies.

NewsGuard analysts also identified more than 500 music videos that, while not depicting violent acts, advocate violence against Ukrainians, including calls to kill Ukrainians because they are “Nazis.” In addition, NewsGuard found five TikTok accounts that direct users to off-platform sites where Wagner regularly posts recruitment notices.(NewsGuard was unable to determine the location of the accounts posting pro-Wagner Group content.)

The 500 videos — which serve as propaganda and recruitment tools for the Wagner Group — appear to violate TikTok’s guidelines, which ban content that “praises, promotes, glorifies, or supports violent acts,” as well as videos that “incit[e] violence against, or otherwise dehumaniz[e] an individual or a group.” Moreover, in March 2022, TikTok said it had banned users based in Russia from uploading any new content. (NewsGuard was unable to determine the location of the accounts posting pro-Wagner Group content.)

NewsGuard also identified 10 hashtags directly related to the Wagner Group that have been used on hundreds of videos, most of which promote or glorify the group. Videos with the top three Russian-language Wagner Group-associated hashtags #чвк (PMC), #вагнер (Wagner), and #чвквангера (PMC ‘Wanger’) have collectively been viewed well over 1 billion times, according to the hashtag pages that show the number of times content with these tags has been seen. (The misspelling of “Wagner” could indicate a circumvention of a previously blocked hashtag.)

Wagner Group-related videos are also garnering significant levels of interest in English; videos with the English hashtags #wagnergroup and #pmcwagnergroup have been seen over 60 million times as of Nov. 29, 2022. Hashtags play an important role on TikTok, enabling users to navigate and find content that interests them, and allowing the platform’s algorithm to promote related content.

The Wagner Group has deployed about 1,000 fighters in Ukraine following Russia’s invasion of the country in February 2022, according to British military intelligence. In December 2021, the European Union sanctioned personnel and firms linked to the Wagner Group over the group’s alleged human rights abuses in several countries, including Ukraine. In May 2022, the Security Service of Ukraine (SBU) accused three Wagner Group fighters of war crimes, including killing and torturing civilians.

Asked for comment, TikTok did not challenge NewsGuard’s findings. In a Nov. 30, 2022 email, a TikTok spokesperson said: “There is no place for hateful or violent content on our platform. Our Community Guidelines clearly outline that we do not allow people to use our platform to threaten or incite violence, or share attacks or slurs based on people’s nationality or other protected characteristics. We will take action on content found to violate these policies.”

NewsGuard found that the 14 videos showing full or partial footage of the apparent execution of the former Wagner mercenary, Nuzhin, saw high engagement within days of being uploaded on Nov. 12, 2022. (Wagner Group leader Prigozhin said that the video was “excellent director’s work” and later denied that the Wagner Group had any involvement in the execution).

TikTok removed 10 such videos during the course of NewsGuard’s reporting, presumably because of its community guidelines that forbid content that “promotes, normalizes, or glorifies extreme violence.”  NewsGuard found that one video of the execution was viewed at least 900,000 times before TikTok took it down.

Nevertheless, at least four videos remained on the platform at the time of this report. One such upload, which calls Nuzhin a “thug,” had more than 381,000 views. NewsGuard also identified 15 videos that appear to trivialize the execution, by playing upbeat music and showing images of Nuzhin in the moments before his death, alongside images of a sledgehammer.

NewsGuard found that although TikTok eventually removed approximately two-thirds of videos appearing to show the recent execution, videos showing another execution by the Wagner Group — in Syria in 2017 — are rife on the platform, reaching millions of users. At least 130 videos on TikTok contain footage or stills – showing men in military clothing, identified by independent Russian news site Novaya Gazeta as Wagner fighters, beating a Syrian citizen named Mohammed Taha Ismail Al-Abdullah to death with a sledgehammer, who attempted to desert the Syrian army, according to Syrian news outlet Jesr Press.

The full version of the video — which NewsGuard found on Russian social network VK — shows fighters dismembering Al-Abdullah and setting him on fire. Videos on TikTok glorifying this act of violence have been viewed more than 1 million times. Since Russia invaded Ukraine in February 2022, images and footage of the Al-Abdullah execution have been used repeatedly in videos as a symbol of Wagner’s ruthlessness and savagery in combat. 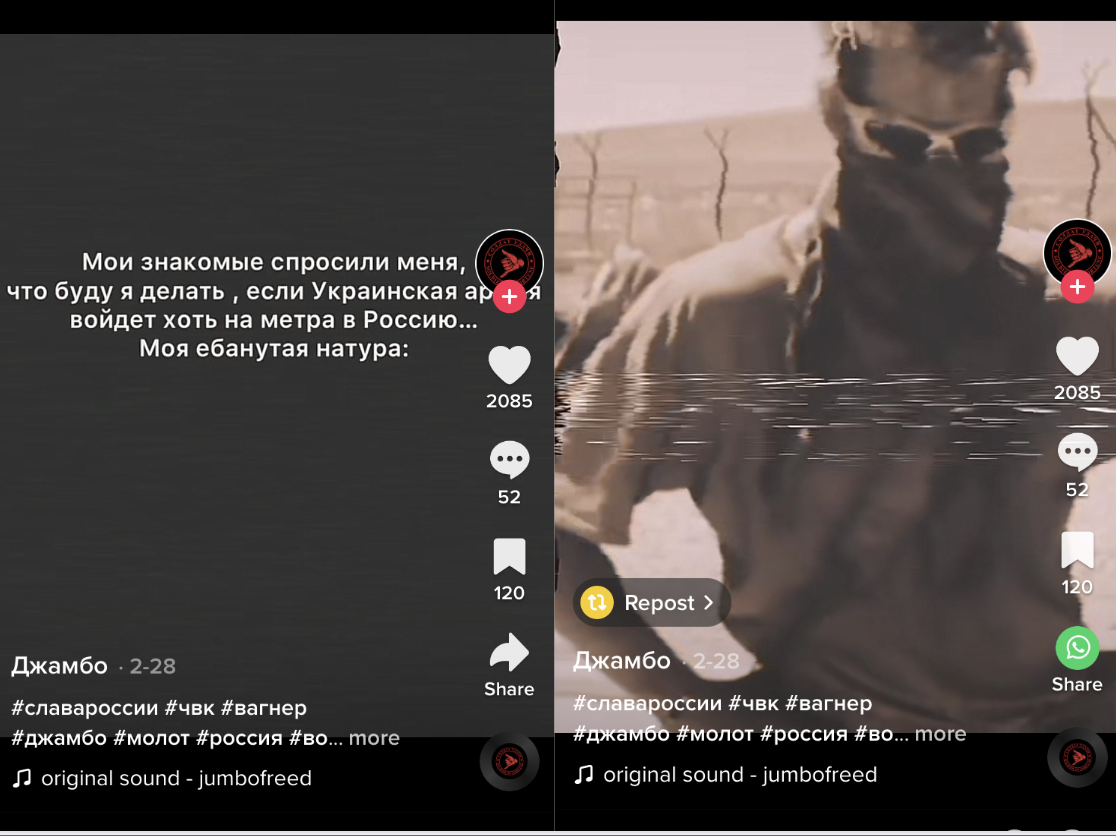 On the left, a screenshot of a TikTok video shows text in Russian: “My friends asked me what I’ll do if the Ukrainian army comes a meter into Russia.” On the right, the same video answers the question with an image of the 2017 Wagner executioner. (Screenshots via NewsGuard)

NewsGuard identified 10 TikTok videos that incite violence against Ukrainians using memes and footage from the execution in Syria. For example, a February 2022 video with 375,000 views as of Nov. 29, 2022, uses footage of the executioner wielding the sledgehammer with on-screen text stating,  “A Ukrainian army nationalist who killed women and children was captured,” suggesting that Ukrainian soldiers should be executed in the same way. The video echoes the Russian government’s false claim that Ukraine has systematically murdered civilians in the Donbas region in the eastern part of the country.

Indeed, images of the 2017 execution of the Syrian citizen have become a widely used meme on TikTok. NewsGuard found more than 30 TikTok accounts that feature the 2017 executioner in their profile photos, and multiple videos showing young men, possibly minors, emulating the executioner’s clothes and pose. 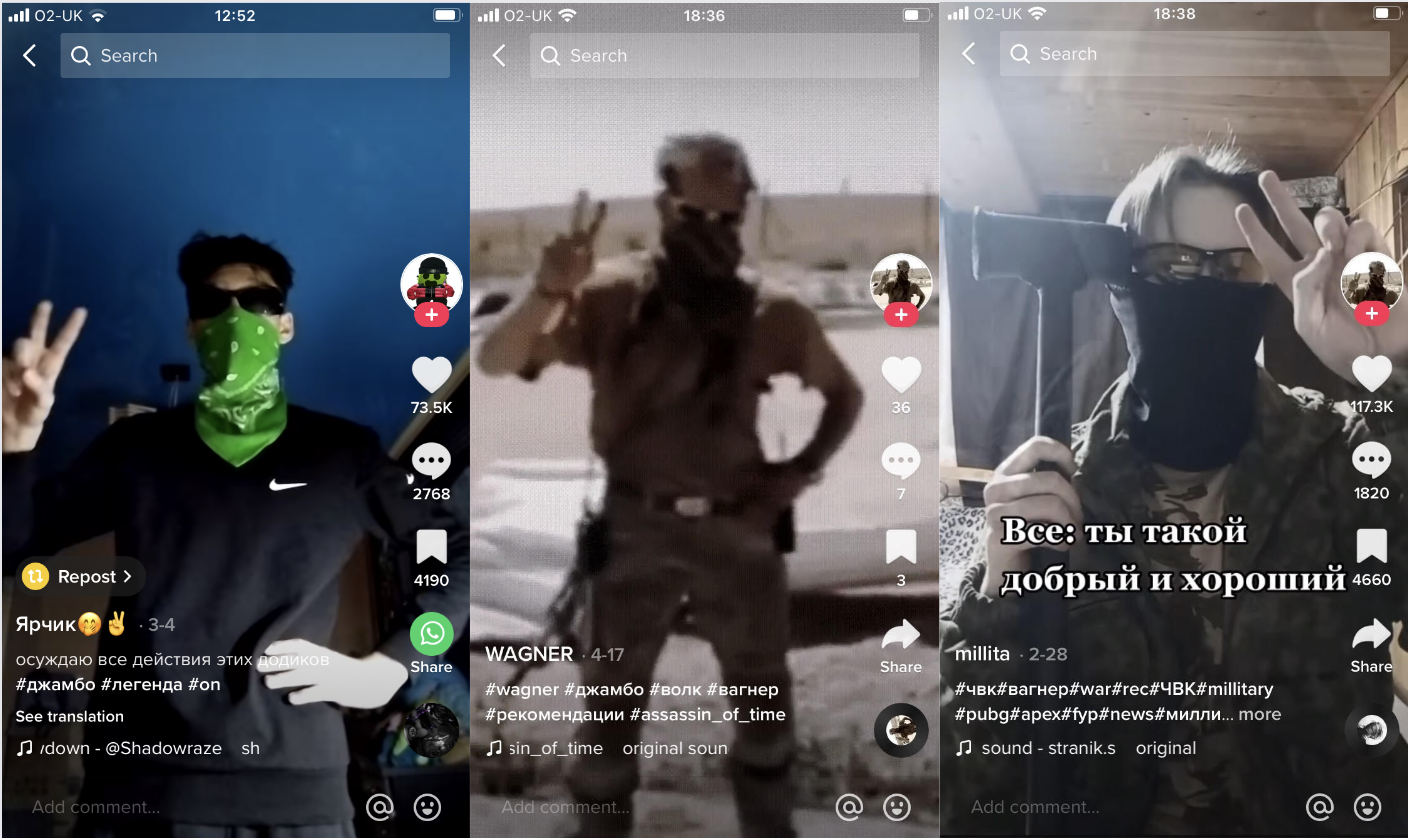 In the center, a screenshot of a 2017 video that shows the Wagner fighter, who executed a Syrian citizen with a sledgehammer. On the left and right, unidentified young men mimic the appearance of the executioner.(Screenshots via NewsGuard)

NewsGuard also found that TikTok’s algorithm appears to push users toward violent Wagner Group content. When a NewsGuard analyst searched for the term “Wagner,” TikTok’s search bar suggested searches for “Wagner execution” and “Wagner sledgehammer.” The same search in Russian resulted in the suggestions “Wagner PMC,” “Wagner sledgehammer,” and “Wagner orchestra.” (As noted above, Wagner refers to the group as an “orchestra’ and its fighters as “musicians.”)

Autocomplete suggestions when searching the term ‘Wagner’ on TikTok 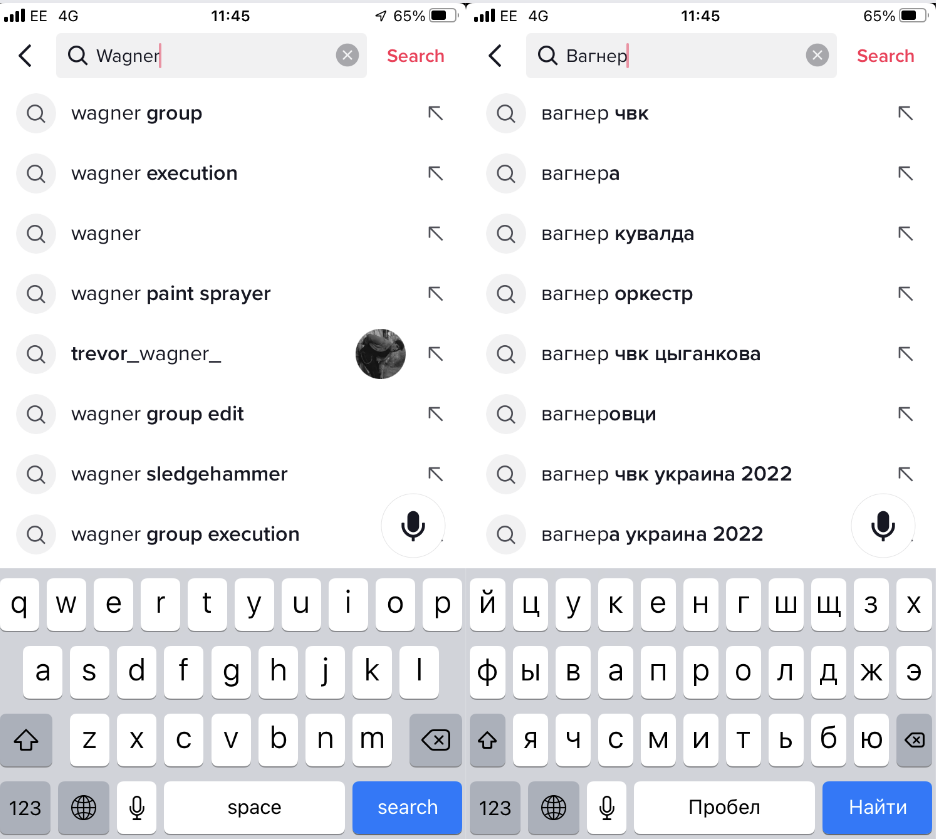 “I am flying in to f*ck up Nazis”: Promoting violence and disinformation through music

In addition to violent videos and memes, NewsGuard found that pro-Wagner Group TikTok accounts are spreading their messages and recruiting soldiers on TikTok through seemingly professionally produced music videos. One video, which had garnered approximately 70,000 views at the time of this report, shows a fighter in a desert shooting a gun and waving a flag reading “ISIS hunters.” The video displays text stating: “visit sites around the world, travel with friends, learn new languages, an active holiday awaits you.”

These and similar videos show users lip-syncing to music that features hateful and violent lyrics. For example, a song used on more than 350 videos features a heavy drum and bass beat, and the Russian lyrics, “I will raze everyone to the ground, I am flying in to f*ck up Nazis … With a Wagner chevron.” The lyrics echo the Russian government’s false premise of “denazification” to justify its invasion of Ukraine.

Another song, used on at least 170 videos, includes the Russian lyrics “Where the soldiers can’t pass, PMCs will pave the way” and references killing Ukrainians with a “pig cutter” (a type of knife), repeating a trope that compares Ukrainian people to pigs. 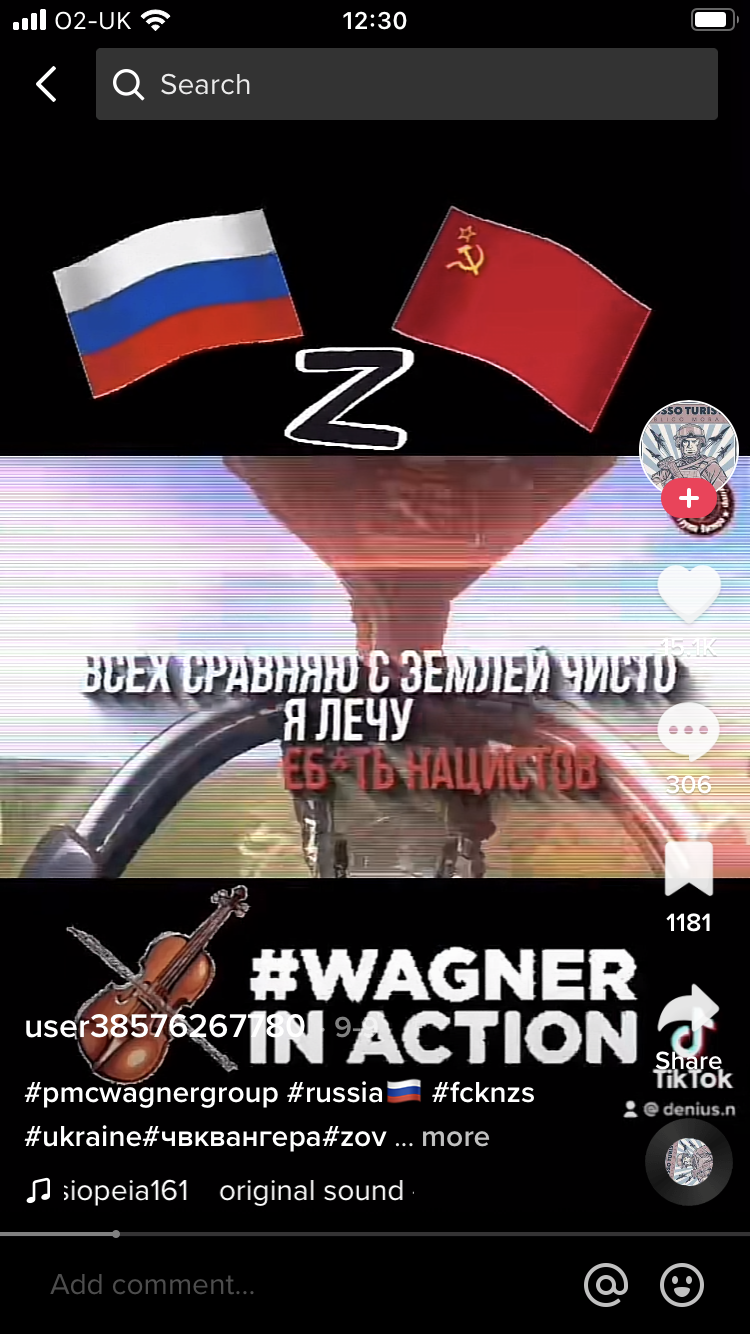 The music video to a song called “F*ck Nazis”. On-screen text features the lyrics “I will raze everyone to the ground, I am flying in to f*ck up Nazis.” (Screenshots via NewsGuard)

‘Celebrate the new year’ with Wagner: From TikTok propaganda, to recruitment on Telegram

While NewsGuard did not find explicit recruitment appeals by the Wagner Group on TikTok, it did find four videos and five accounts that provide the names of Telegram channels or pages on Russian social network VKontakte, where Wagner Group recruiters regularly solicit new members.

For example, three pro-Wagner Group TikTok videos posted in November 2022 featured a URL in the center of the video. When a NewsGuard analyst visited the link, she was brought to the Wagner Group’s “official” Telegram channel, which posted recruitment notices 15 times in November 2022 alone. “You have the unique opportunity to celebrate the new year around a fire with the friendly Wagner PMC,” one notice read, before listing the phone numbers for local Wagner Group recruiters in 33 Russian regions.

Since Russia invaded Ukraine, the Wagner Group has transitioned from a secretive organization — largely ignored by the Russian state media, and links to which founder Prigozhin himself denied — to an exuberant group playing an increasingly prominent role in Russia’s pro-war propaganda campaign. Over the course of its investigation, NewsGuard found that dozens of new videos glorifying the Wagner Group were uploaded to TikTok daily, including music videos and clips from a November 2022 documentary about the Wagner Group, called “Contract With the Motherland,” and produced by Russian disinformation outlet RT.

Editor’s Note: After this report was published on Dec. 1, 2022, TikTok removed many of the videos and hashtags that NewsGuard cited.

NewsGuard provides a human solution to misinformation by rating the reliability of news and information sites. Our ratings, based on nine objective journalistic criteria, give each website a score from zero to 100 and give people more context for what they read online. Use the form below to subscribe.