Dark Money Political Ads Proliferate on Facebook and Instagram Ahead of the U.S. Midterms, Enabled by the Platforms’ Policies

By Lorenzo Arvanitis and McKenzie Sadeghi

In September 2022, an article appeared on millions of Facebook and Instagram feeds in Michigan, reporting that the state’s Republican gubernatorial candidate, Tudor Dixon, “said that a 14-year-old girl raped by her uncle was a ‘perfect example’ of a case in which abortion should not be allowed under the law.” The article, designed to mobilize Democratic voters, was posted on Facebook and Instagram by a seemingly local news outlet called The Main Street Sentinel.

Although the article devoted more space and a positive spin to the pro-choice views of Dixon’s opponent, it did accurately quote and summarize Dixon’s position. However, astute Facebook and Instagram users might have noticed that the article was actually an ad that carried a “sponsored” label in small print above the text, followed by a disclosure that the post touting the article was “Paid for by The Main Street Sentinel.” But that did not mean that the ad was paid for by a benign local news outlet seeking to call attention to its reporting.

Nor was it likely paid for by “The Main Street Sentinel,” which is not the name of a U.S.-registered business.

The Main Street Sentinel is hardly the only partisan organization masquerading as local news and attempting to sway public opinion before the November midterm elections. Together with Courier Newsroom and The American Independent on the left and Metric Media on the right, these four operations have spent approximately $3.94 million on ad campaigns running simultaneously on Facebook and Instagram so far in 2022, a NewsGuard review found. With these ads able to reach highly targeted audiences for a fraction of the cost of other media, they have been featured on Facebook and Instagram feeds more than 115 million times, NewsGuard found. These efforts, and the spending, are only likely to accelerate in the final two weeks before the midterm elections.

Most of the spending came from Courier Newsroom, which purchased $2.33 million in Facebook and Instagram ads between Jan. 1, 2022, and Oct. 22, 2022, according to Meta’s Ad Library. During the same period, The Main Street Sentinel, which states on its About page that it is owned by Star Spangled Media, LLC, spent $1.2 million on Facebook and Instagram ads. Metric Media spent $276,000 and The American Independent spent $132,500. Their expenditures have been increasing markedly in the weeks preceding the Nov. 8, 2022 elections, NewsGuard found.

A montage of "pink slime" Facebook pages (Screenshots via NewsGuard)

Ahead of the 2020 presidential election, Courier Newsroom and Metric Media launched websites in local communities across the country, pumping out hypertargeted, hyperpartisan content designed to influence voters. Since then, two new secretly partisan news organizations have emerged, The American Independent and The Main Street Sentinel, illustrating the increasing popularity of so-called “pink slime” networks — a reference to the meat-based filler that was supposedly added without a label to ground beef products.

Facebook and Instagram have been pivotal in these groups’ strategies. NewsGuard found that these pseudo newsrooms have taken advantage of the Meta’s low costs, hypertargeting tools, and porous policies related to political ad spending to target voters in battleground states while underplaying or entirely hiding their partisan-driven agendas and financing.

Meta’s advertising tools provide publishers with detailed targeting options to reach audiences based on the characteristics they seek. For example, advertisers can choose people living in a specific political precinct, who read certain newspapers, are especially interested in certain subjects or issues, such as NASCAR races or climate activism, and are a certain age and gender. The pink slime networks are making the most of these tools to target exactly the voters they want to reach with exactly the message they want to send in hotly contested races in political swing states, where a shift of 5,000 or 10,000 votes could be decisive.

NewsGuard’s analysis of Meta’s Ad Library identified thousands of ads from the four pink slime groups promoting either Democrats or Republicans and focusing on hot-button issues, such as abortion, inflation, education, and crime. The ads, which were disguised as articles from local news publications, and which ran on Facebook and Instagram, included: 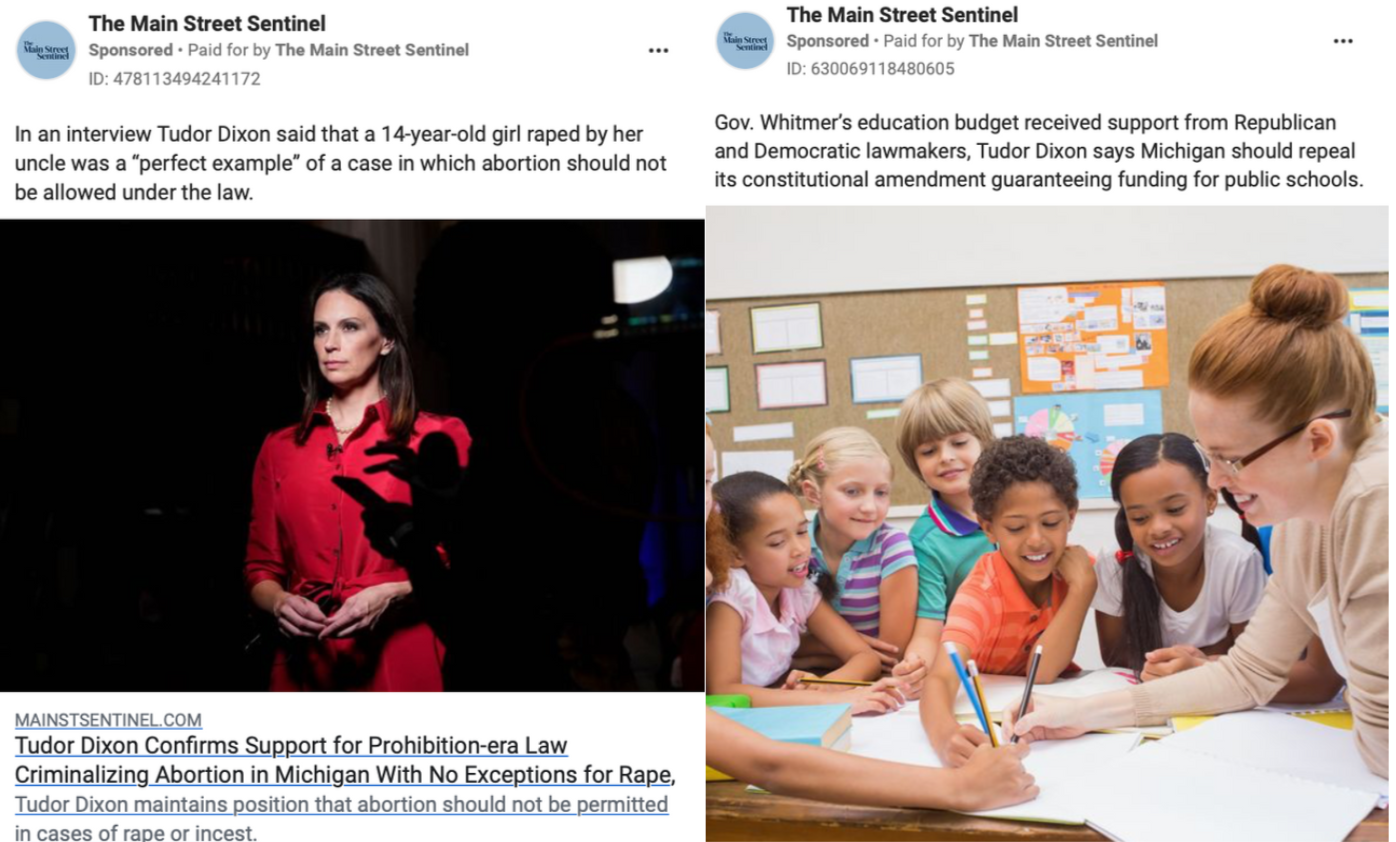 NewsGuard’s analysis found that the ads typically link to articles that, as in the case of the one about Dixon, the Republican gubernatorial candidate, are not blatantly false, but can be misleading in the service of advancing an agenda. For example, The Main Street Sentinel abortion ad criticizing Dixon omitted that she said that she favors exceptions to an abortion prohibition to save the life of the mother.

Courier touts how its money gets votes

Courier Newsroom, a network of liberal news sites founded by former Democratic operative Tara McGowan, used some of the most aggressive targeting tactics among the groups NewsGuard reviewed. In an August 2022 “case study” presented on its website to explain how effective its spending is, Courier Newsroom touted its ad-targeting campaign on a page titled “Local Newsroom Proves Ability to Turn Out Voters in Rural Iowa.” The group described how its Iowa publication had spent $49,000 on Facebook ads targeting 12 Iowa counties ahead of the state’s June 2022 primary election. According to Courier, the campaign resulted in 3,300 more votes, presumably for Democrats.

The Main Street Sentinel, Metric Media, and The American Independent have implemented similar strategies. According to NYU’s Ad Observatory, a database of ad spending on Facebook and Instagram, the second and third top spenders on political ads in Michigan in 2022 have been The Main Street Sentinel ($693,200) and Courier Newsroom’s Michigan outlet ($371,900), respectively — which, the database shows, have outspent high-profile outfits such as Planned Parenthood and the conservative advocacy group Americans for Prosperity, founded by the Koch brothers.

To reach their target audiences, these pink slime operations appear to use Meta’s Custom Audiences tool, which allows them to find their existing audiences on Facebook and Instagram through the email addresses and phone numbers that the sites have on record. One of the groups, Courier Newsroom, also appears to use Meta’s Lookalike Audiences tool to expand its existing audience list by looking for users with similar characteristics and interests, such as Georgia residents who are over 60 and Bob Dylan fans.

The Main Street Sentinel, The American Independent, Courier Newsroom, and Metric Media, did not respond to NewsGuard’s inquiries in October 2022 seeking comment on their advertising practices. 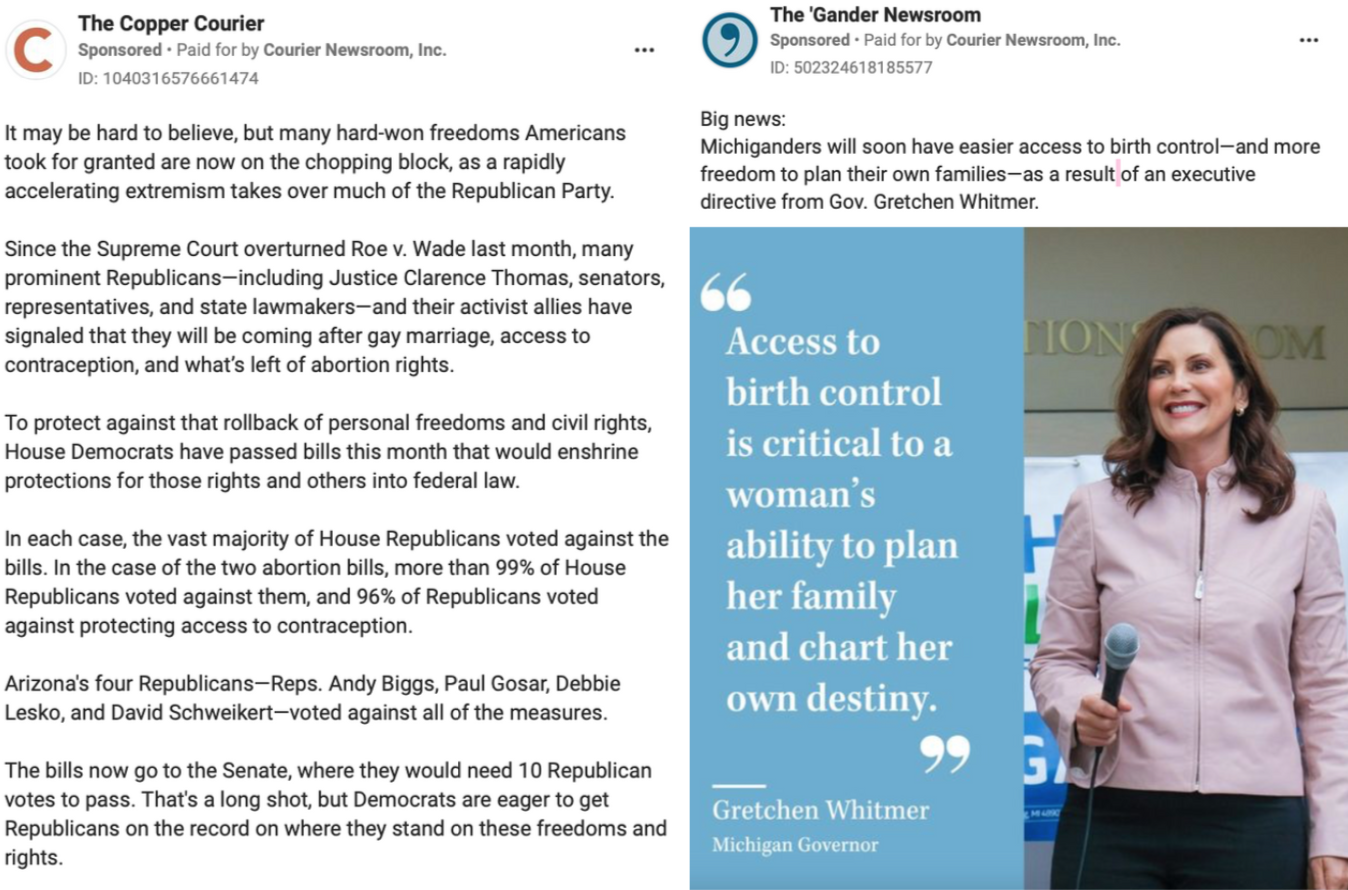 In addition to using Meta’s ad-targeting tools, the pink slime groups have also benefited from the social media conglomerate’s lax advertising policies, which allow them to mask their partisan funders and ties.

Meta does require political ads to name the source of their funding, but it leaves it up to the sponsors themselves to create and manage their own “paid for” disclosure. The result is a new kind of political dark money: The partisan networks can, and often do, identify their funders as seemingly apolitical entities, about which little is known.

For example, although The Main Street Sentinel states on its website that it is owned by Star Spangled Media LLC, the group’s Facebook and Instagram ads say that they are “Paid for by The Main Street Sentinel” — a name that does not appear on any state business registries, and that give the ads a patina of journalistic authenticity.

Before the 2020 U.S. presidential election, Facebook and Instagram updated their advertising policies to require “paid for” disclosures on political ads. “People should know who is trying to influence their vote and advertisers shouldn’t be able to cover up who is paying for ads,” the post promised.

However, as NewsGuard’s review highlights, the pink slime operations have apparently been able to achieve precisely what Facebook and Instagram have said that they were seeking to avoid.

NewsGuard, in its ratings for Courier Newsroom, The American Independent, The Main Street Sentinel, and Metric Media gives websites in each network a Red shield, explaining that their undisclosed funding and other poor journalism practices mean readers should proceed with caution. Facebook does not provide readers with disclosures such as NewsGuard ratings to give them information about the trustworthiness of websites feeding them information in their news feeds.

Meta says that it is committed to “protecting elections and increasing authenticity, transparency and accountability for advertisers,” according to “The Election Integrity at Meta” page. However, by providing the ideological networks with powerful tools to target audiences in battleground states, with loose standards that can be manipulated by partisan actors, Meta has in fact been contributing to the deception.

Correction: An earlier version of this Misinformation Monitor did not clearly state which “pink slime” organizations collectively spent $3.94 million on ad campaigns on Facebook and Instagram this year. That amount reflects the spending for the four groups covered in the report – the Main Street Sentinel, Courier Newsroom, The American Independent, and Metric Media. NewsGuard apologizes for the error.