By Lorenzo Arvanitis and Kendrick McDonald

With more than half a billion followers on Facebook, Chinese state-run news organizations have persistently spread Russian disinformation narratives since the invasion of Ukraine, according to an analysis by NewsGuard. These organizations, which are controlled by the Chinese government, have massive Facebook audiences that are many times greater than those of Western outlets, even though the social media platform is blocked in China — meaning that their massive audiences are located throughout the rest of the world, where they read this propaganda in their native languages.

By far the most prominent narrative pushed by these sources has been that the U.S. operates biological labs in Ukraine that are developing bioweapons — a claim that the Kremlin has repeatedly used to justify its invasion of Ukraine.

Since Feb. 24, 2022, NewsGuard identified 74 English-language posts on Chinese state media Facebook accounts (including videos, articles, and cartoons) that mentioned biolabs, including one from the state-run news agency Xinhua, which re-posted a video from March 10 of the Russian Defense Ministry spokesperson Igor Konashenkov claiming that a “bat coronavirus” was found in a U.S.-backed bioweapons lab in Ukraine. “The purpose of these and other Pentagon-funded biological researches [sic] in Ukraine was the creation of [a] mechanism for the covert spread of deadliest pathogens,” Konashenkov said in the video. The post had received approximately 21,300 interactions, and was shared 6,400 times as of April 20, 2022.

Although that post included a Facebook fact-checking notice flagging the post for “partly false information” and linking to a fact-checking article, many others did not. For example, many unflagged posts also stated as fact that the U.S. owned or operated biological laboratories in Ukraine, which the U.S. Department of State has repeatedly denied. Other posts uncritically repeated the Kremlin’s claims that these labs were building bioweapons.

In fact, scientists say that the bat research that took place in Ukrainian laboratories constituted “very basic epidemiological research,” according to Science magazine. Moreover, there is no evidence that this research — or any research that occurred in these laboratories — was used to develop biological weapons. 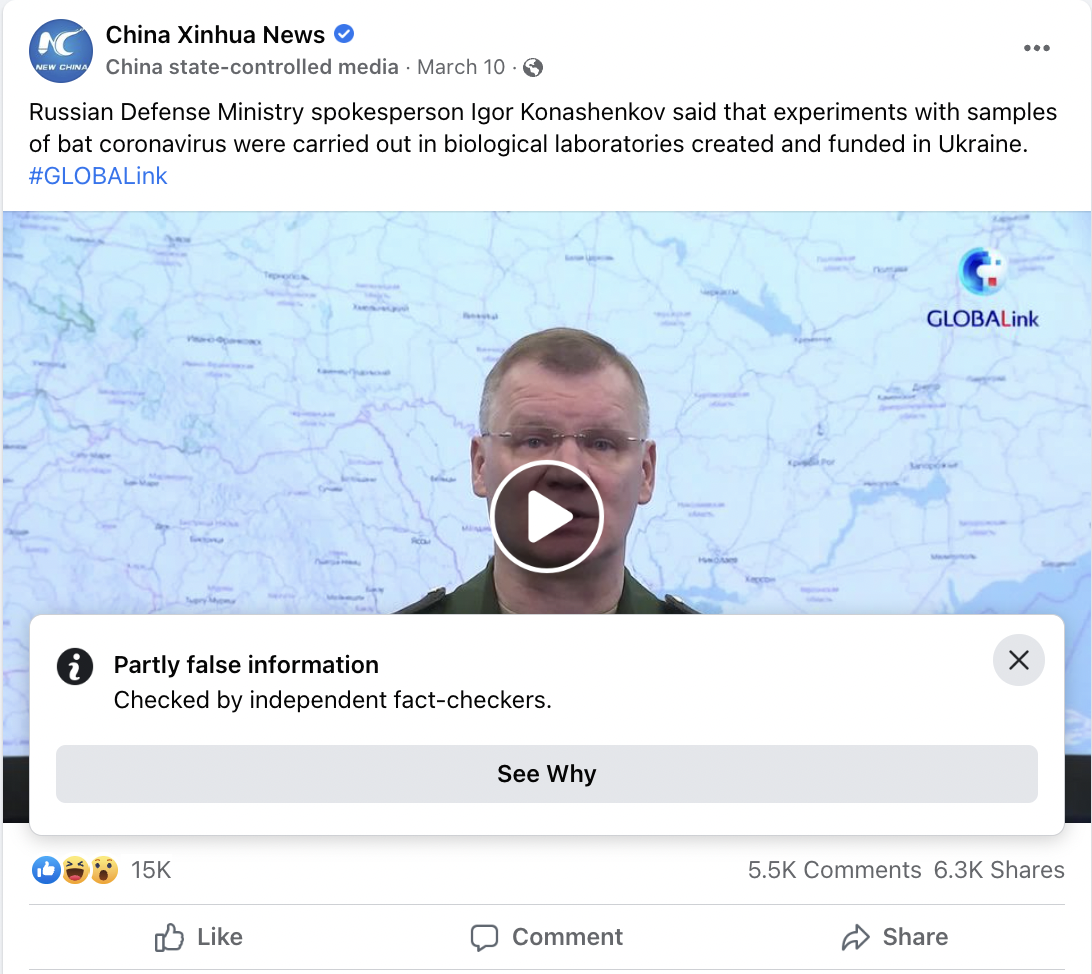 State-run news agency Xinhua re-posted a video from March 10 of the Russian Defense Ministry spokesperson Igor Konashenkov claiming that a “bat coronavirus” was found in a U.S.-backed bioweapons lab in Ukraine.. (Screenshot via NewsGuard)

In addition to propagating falsehoods about Ukraine’s biolabs, other posts from China repeated the Kremlin’s propaganda that Russian troops were not responsible for civilian killings in Bucha, Ukraine, and the bombing of Mariupol’s maternity hospital. (NewsGuard has debunked top war-related myths on the Russia-Ukraine Disinformation Tracking Center.)

Misinformation about the conflict was not unique to the Chinese outlets’ English-language Facebook pages. NewsGuard also identified multiple posts about the bioweapons labs on their French- and Italian-language counterparts.

For example, the French-language page CGTN Français uncritically repeated the Russian Defense Ministry’s accusation about a biological military program funded by the U.S. in Ukraine (“un programme biologique militaire financé par les États-Unis en Ukraine”). The page also claimed that the U.S. embassy in Ukraine had deleted information about Ukraine’s biolabs from its website, which is false. 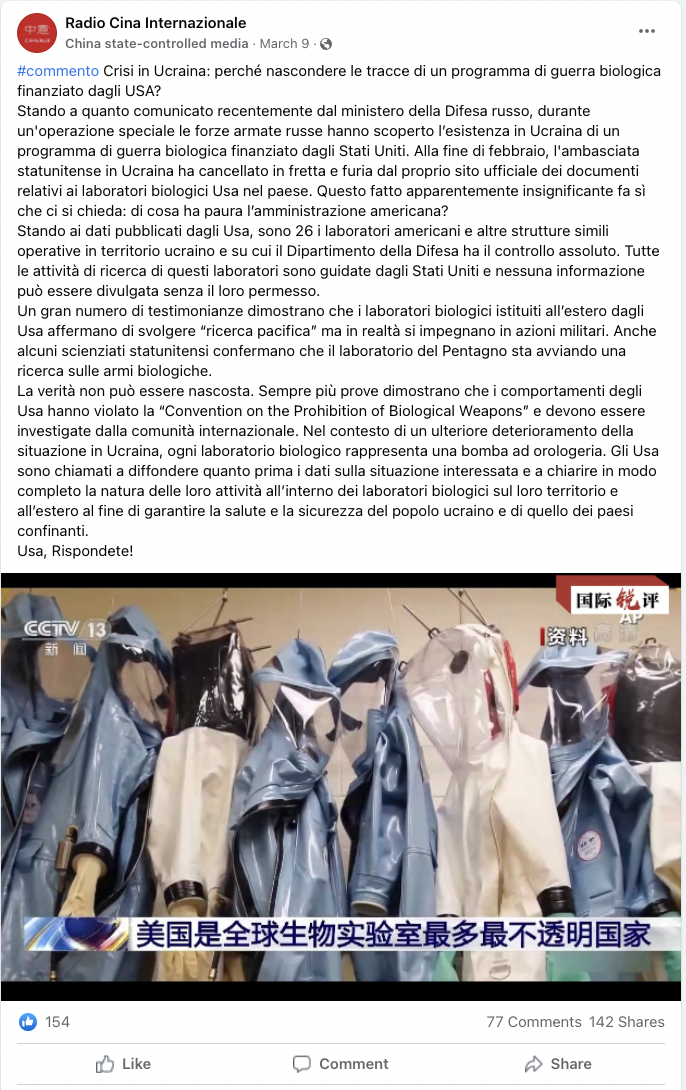 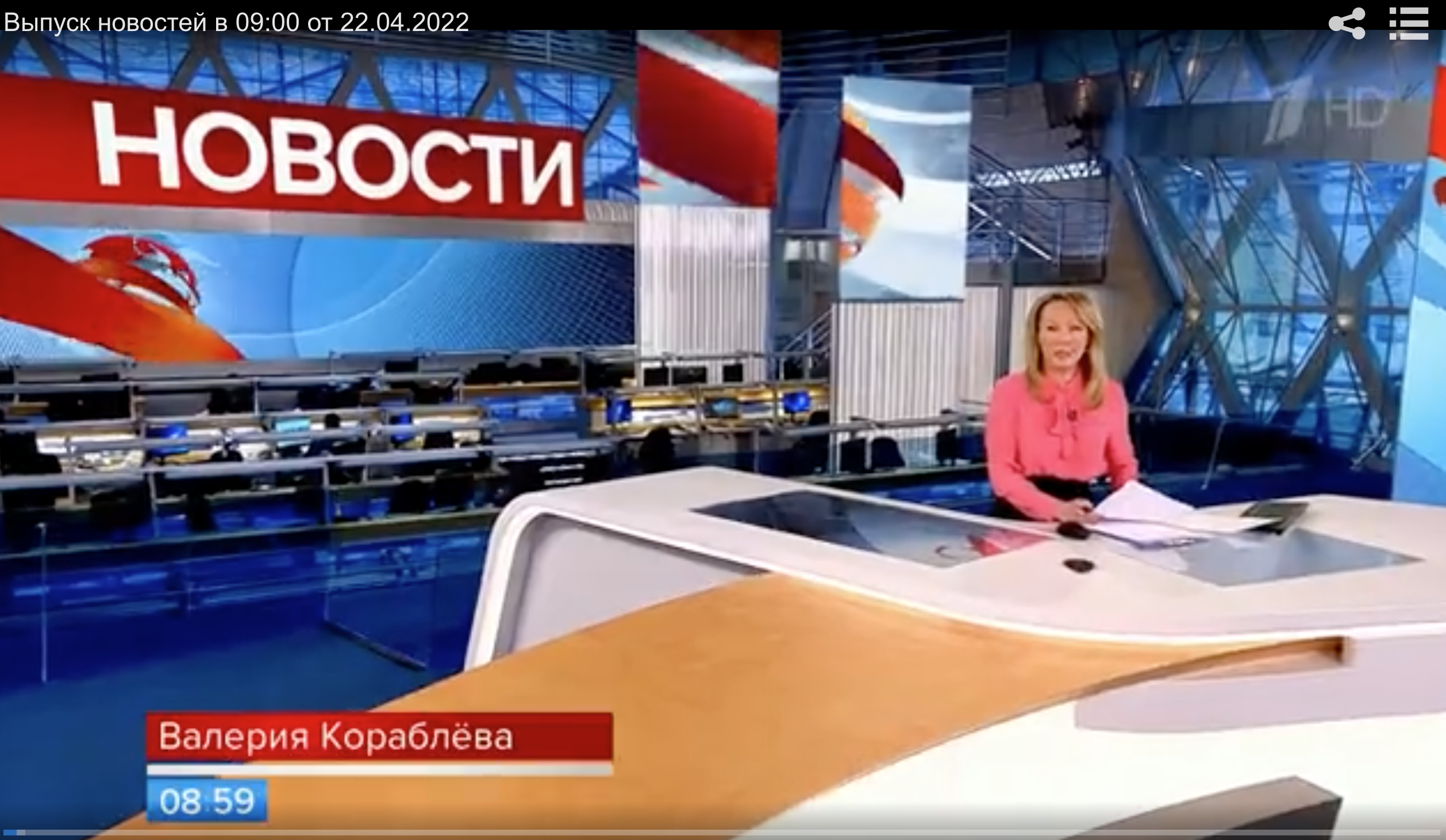 From April 11 through April 22, there was no mention of deaths in the Russian military. The word “war” was not uttered. In the story told by the Russian state TV, Russian soldiers were victorious “defenders”, the Ukrainians were “Nazis” and the West’s military support for Ukraine was hypocritical and pointless.

Since April 11, 2022, NewsGuard has been translating and summarizing the 9 am news program on the state-run Channel One (“Pervy Kanal”), Russia’s most widely watched TV news channel, according to a 2018 survey by the independent Moscow-based pollster, the Levada Center. (NewsGuard has debunked top war-related myths on the Russia-Ukraine Disinformation Tracking Center.) 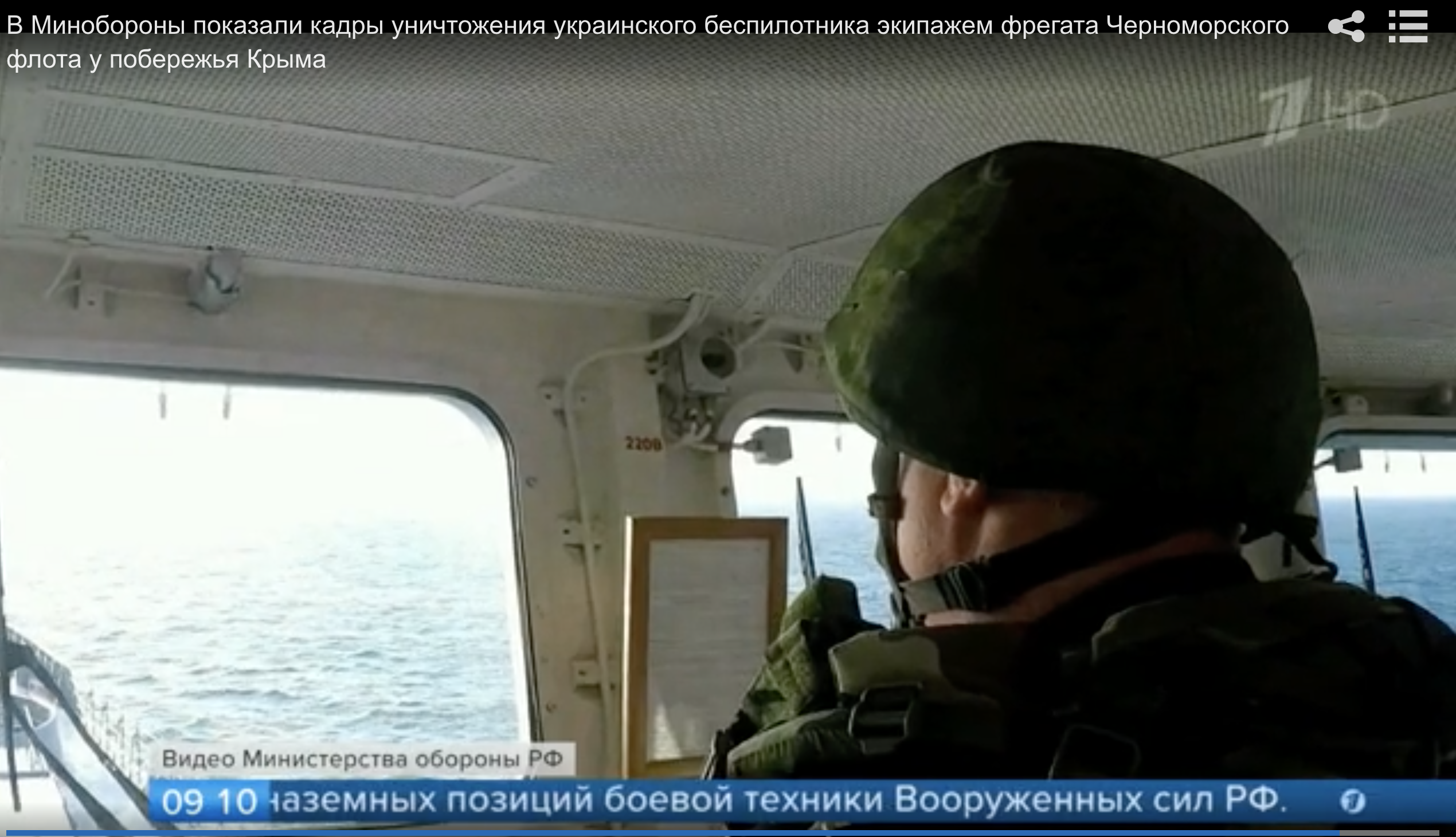 Footage from Russia’s Ministry of Defence, aired on Channel One on 12 April, 2022, purportedly shows the crew of “Admiral Essen” frigate destroying a Ukrainian drone off the coast of Crimea. The Russian Ministry of Defence claimed that the drone gathered intelligence about the actions of the ships of the Black Sea Fleet, as well as coastal and ground positions of Russia’s military equipment. (Screenshot via NewsGuard)

Channel One’s morning programs between Monday, April 11, 2022, and Friday April 22, 2022, featured 65 stories about the Russia-Ukraine war. Coverage was largely focused on four themes: the heroism and strength of the Russian army, the aggression of the Ukrainian army, Russia’s humanitarian assistance to Ukrainians, and Western military aid to Ukraine.

Eighty-five percent of Russians get their news from state TV, according to a 2018 poll by the Levada Center. On March 4, less than two weeks after the invasion began, the Kremlin passed a law punishing purveyors of “fake news” with up to 15 years in prison. The same day, the Russia state media regulator Roskomnadzor blocked access to BBC, Deutsche Welle, and other foreign news sites.

With the Kremlin tightening its grip over the media, the official narrative is now more likely than ever able to go unchallenged. 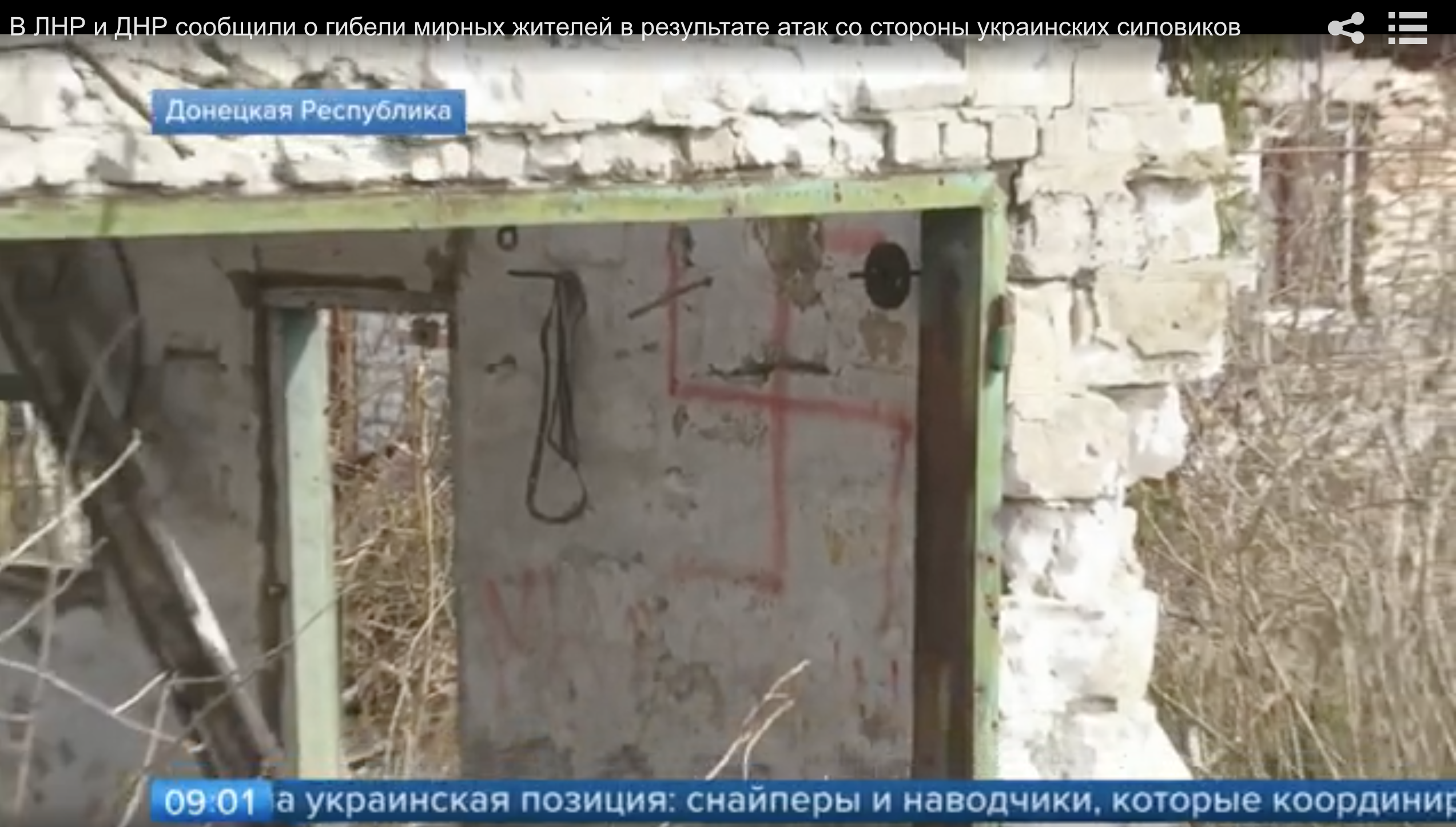 In an April 11, 2022 news segment about alleged reports of civilian deaths at the hands of the Ukrainian army in the Donetsk and Lugansk Peoples' Republics, Channel One claimed that the Ukrainian army drew a swastika in a house in Donetsk. The Russian government has frequently claimed that Nazism is rampant in Ukrainian politics and society. (Screenshot via NewsGuard)
Get NewsGuard

More whack-a-mole: Filling RT and Sputnik’s void, Russia-friendly countries use YouTube to push misinformation about the war, with huge reach

YouTube is banned in China and periodically censored in Venezuela, but that has not stopped Chinese and Venezuelan state-sponsored media outlets from using the U.S.-based video platform to spread disinformation about the war in Ukraine in English around the globe, a NewsGuard investigation has found.

NewsGuard’s findings highlight how YouTube’s lax moderation practices have led to a game of misinformation whack-a-mole. After news outlets reported extensively on the proliferation of pro-Russian disinformation from Russian state-funded media outlets, the European Commission, in March, required that digital platforms take action against Russian government-operated news sites, referring to RT and Sputnik News. On March 11, 2022, YouTube blocked its distribution of Russia-controlled media companies RT and Sputnik globally and promised to crack down on war-related content “denying, minimizing, or trivializing well-documented violent events.” But NewsGuard’s investigation found that state-sponsored media outlets in China and Venezuela, as well as Belarus, have easily circumvented YouTube’s crackdown and filled the void once occupied by the Russian channels.

In April 2022, NewsGuard searched the YouTube channels in English of 10 state-sponsored media outlets from China, Venezuela, and Belarus for pro-Russian disinformation about the conflict in Ukraine. Many of the channels have large audiences, such as the China-based channels China Global Television Network and New China TV, which have 2.79 million and 1.28 million global YouTube subscribers, respectively (YouTube does not provide public data about the geographic location of subscribers). 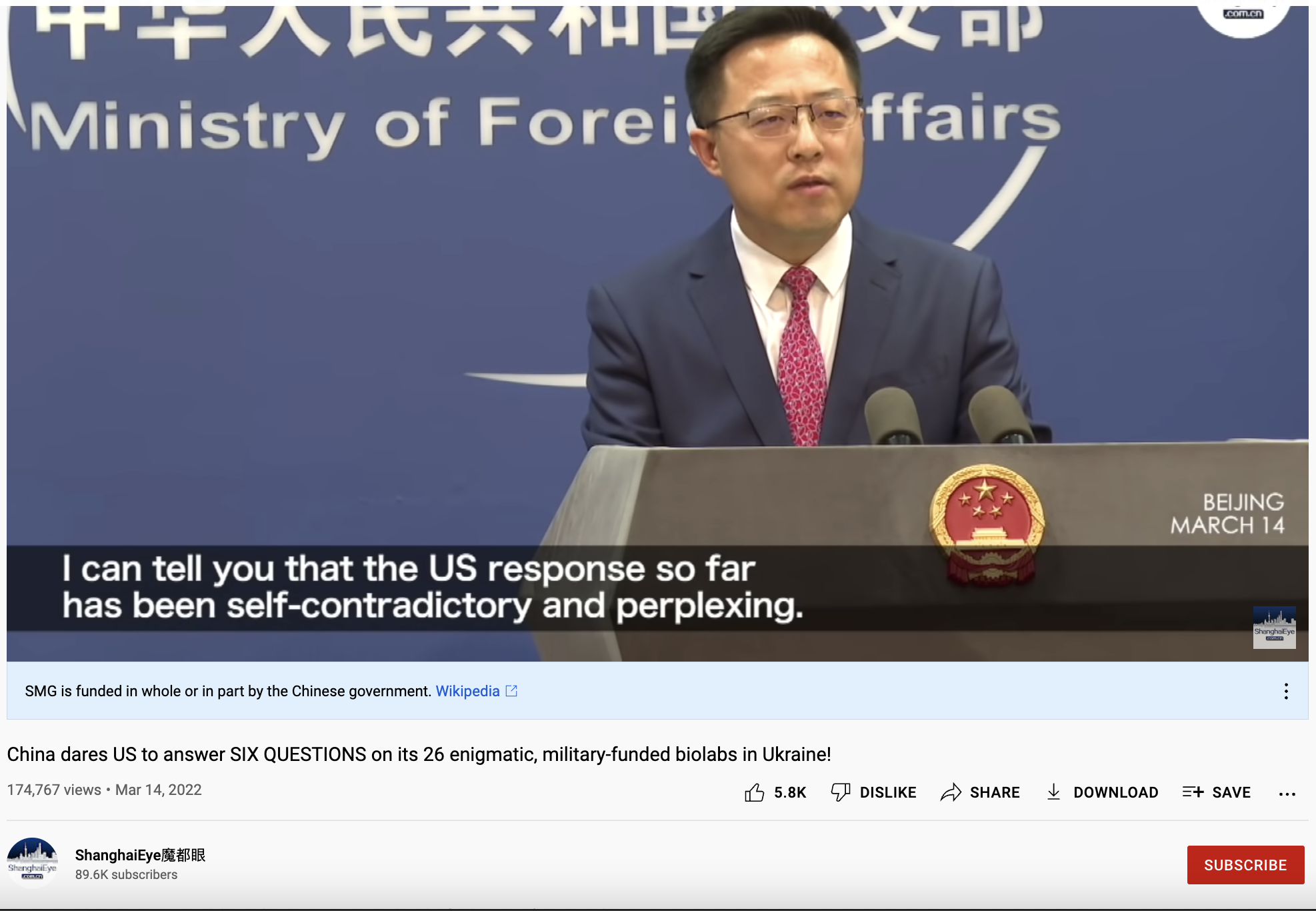 Shanghai-based state media outlet Shanghai Eye posted videos accusing the U.S. of operating “enigmatic” biological labs in Ukraine and urging the U.S. to “offer a clear account of its biological military activities at home and abroad.” (Screenshot via NewsGuard)

NewsGuard’s investigation highlighted how YouTube is still being used as a tool: China and Venezuela block, censor, and temporarily restrict the platform at home, only to push disinformation to a willing public abroad. To be clear, YouTube is still generally accessible in Venezuela, but the Venezuelan government has blocked access to it in the past. And although the platform is blocked across mainland China, people in Hong Kong and Macau can still access it. People in Venezuela and China can also get around internet restrictions by using a virtual private network (VPN).

NewsGuard identified 43 videos from state-run outlets in China, Venezuela, and Belarus spreading disinformation about the war. Taken together, the videos had garnered approximately 2.2 million views as of April 20, 2022.

Despite the Chinese government’s efforts to portray itself as neutral in the Russia-Ukraine war, the overwhelming majority (77 percent) of YouTube videos containing disinformation identified by NewsGuard came from China state-run outlets.

For example, after Russia’s Feb. 24, 2022, invasion of Ukraine, the channel of a Shanghai-based state media outlet Shanghai Eye posted videos accusing the U.S. of operating “enigmatic” biological labs in Ukraine and urging the U.S. to “offer a clear account of its biological military activities at home and abroad.” Other videos denied that Russian troops were responsible for the massacre of civilians in the Ukrainian town of Bucha. 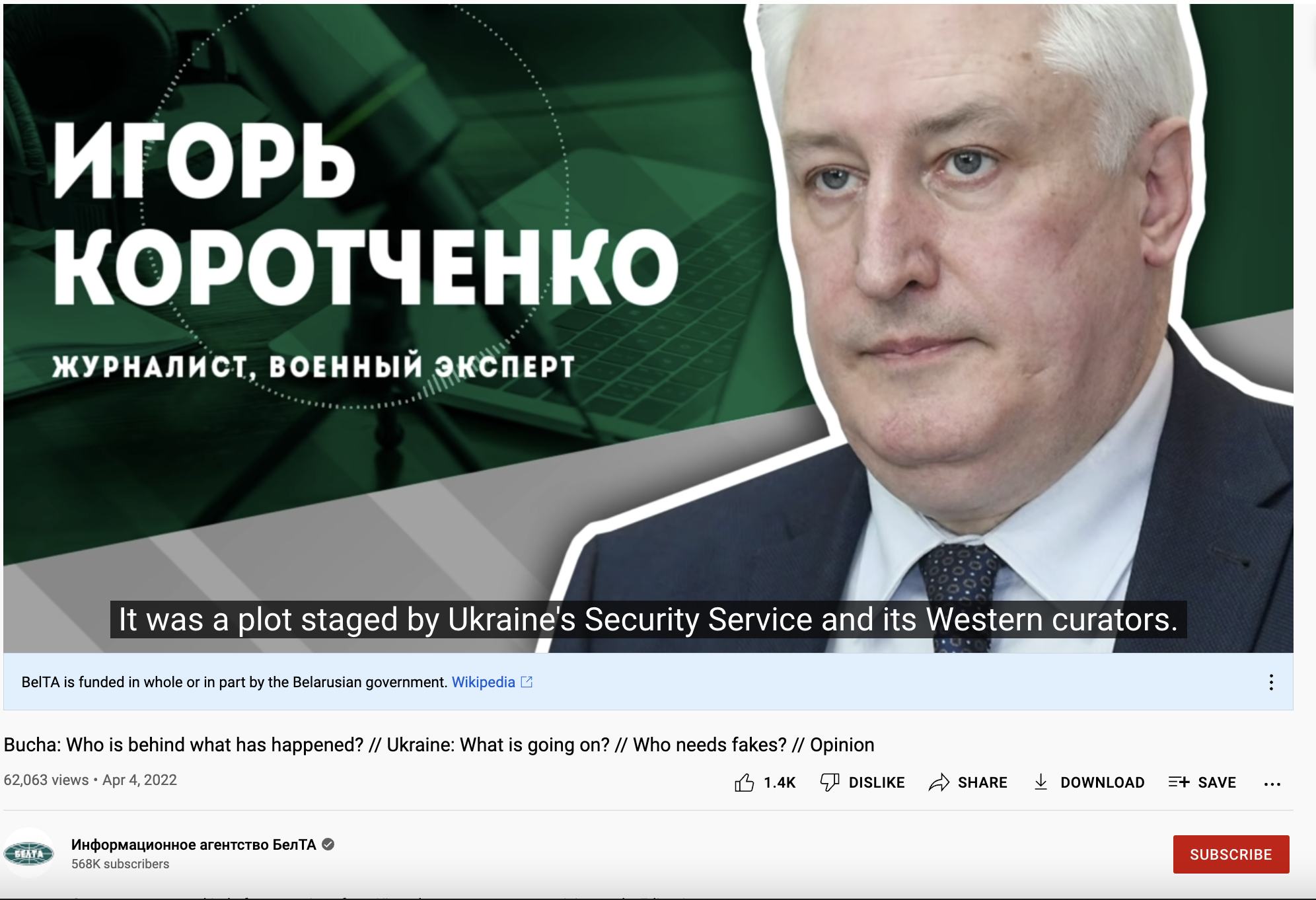 The Belarussian state outlet Belarusian Telegraph Agency falsely argued that the Bucha killings were staged, in an effort to pit the West against Russia.  (Screenshot via NewsGuard)

These videos together accrued approximately 577,000 views. NewsGuard analysts found 25 other videos across state-run news outlets based in China and Venezuela pushing false claims about U.S.-run bioweapon or biological laboratories in Ukraine.

The channel of the Venezuelan state-funded television network TeleSUR posted multiple videos uncritically repeating the Kremlin’s disinformation narratives about the killing of Ukrainian civilians in Bucha being “staged” and “fake.” The Belarussian state outlet Belarusian Telegraph Agency falsely argued that the Bucha killings were staged, in an effort to pit the West against Russia. 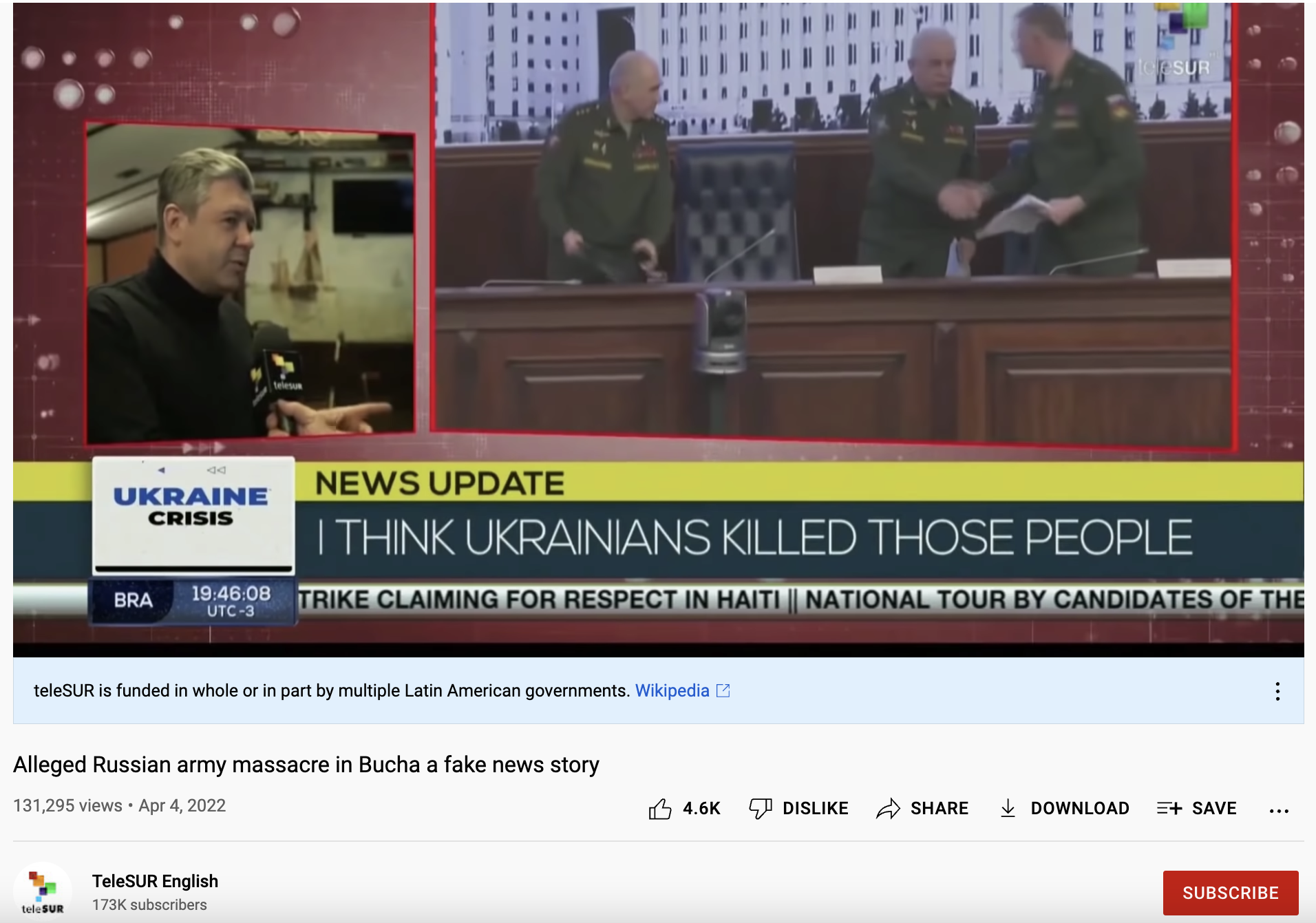 In addition to spreading false narratives, many of the channels employed Russian rhetoric, such as downplaying the gravity of the conflict by referring to the war as a “situation,” “special operation,” or “issue.” Other videos put Russia’s false claim that the massacre of civilians in Bucha was staged on equal footing with overwhelming evidence that the massacre did occur.

Announcing its RT and Sputnik ban on March 11, 2022, YouTube promised to block access to “channels associated with Russian state-funded media globally.” However, that move has clearly left space for other bad actors to fill the breach.