One year after the Jan. 6 riot, 81 percent of 2020 election misinformation publishers in the U.S. identified then by NewsGuard continue to spread false election claims

Nearly 900 major brands are funding these sites with digital ads, despite widespread reporting on the problem 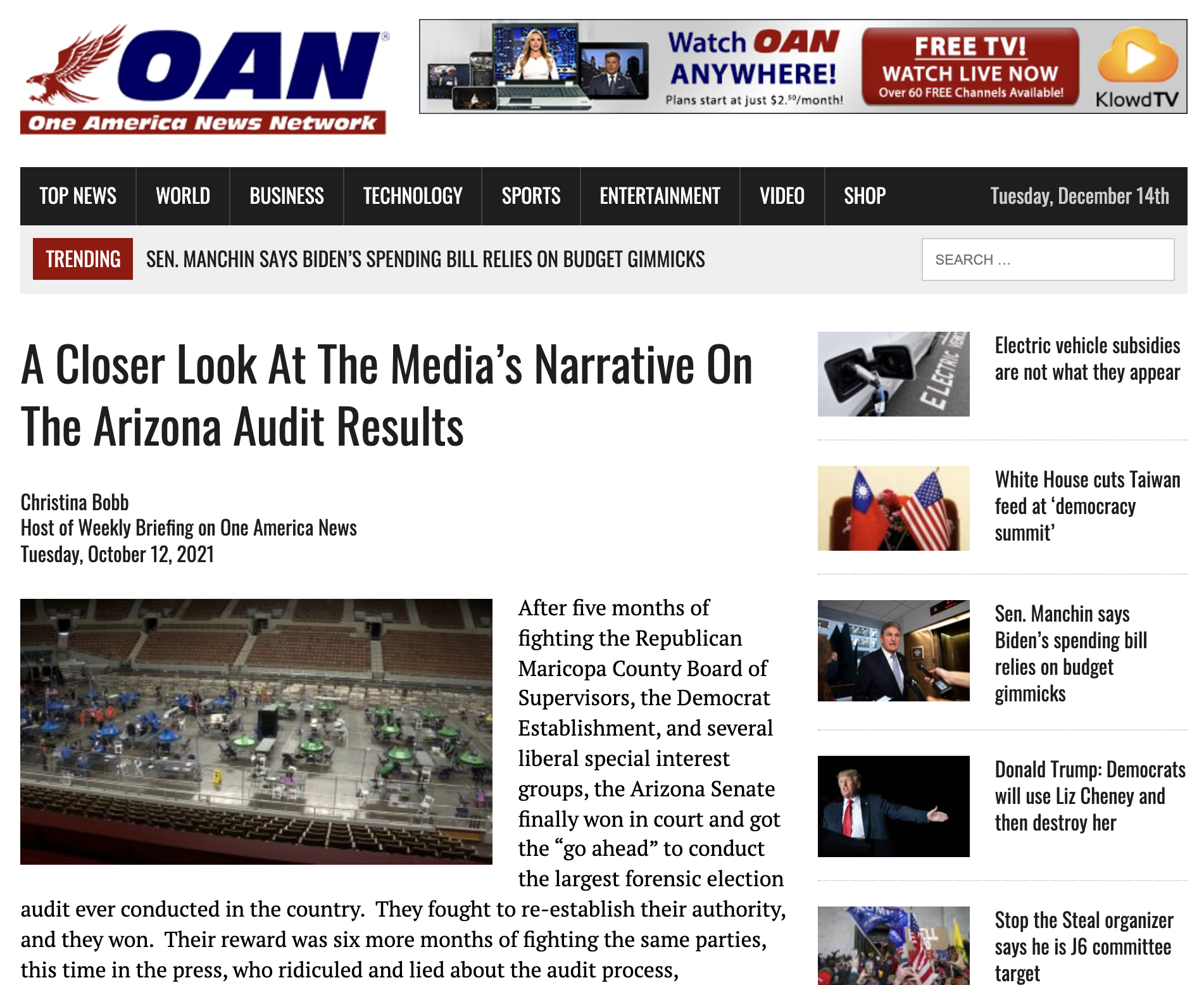 Of the 113 U.S. websites that NewsGuard found were spreading election misinformation in the immediate aftermath of the 2020 presidential vote and that are still active, 81 percent have continued to spread false claims about the election, including about the Jan. 6 attack on the U.S. Capitol, a NewsGuard analysis has found.

The problem is global. NewsGuard also found that half of the European websites that it identified as spreading election misinformation last year and that are active still share U.S.-focused misinformation with their audiences.

Now, more than a year after the 2020 election, and as the nation approaches the anniversary of the Jan. 6 attack, a NewsGuard analysis has found that the vast majority of the sites spreading election misinformation a year ago have continued to promote the narrative that the election was not legitimate, while defending, downplaying, or redirecting blame for the riot.

NewsGuard also found that 892 major brands were financing the sites that have published election or Jan. 6 misinformation between Sept. 1 and Dec. 1, 2021 during this time period through the purchase of digital advertisements, according to data from Moat Pro, an advertising intelligence tool. There has been widespread reporting in the past year about how misinformation sites are funded by programmatic advertising revenue — including a report by NewsGuard and media measurement firm Comscore earlier this year estimating that companies send $2.6 billion in ad revenue to misinformation sites each year. The 892 brands advertising on the 159 sites NewsGuard identified as publishing election or Jan. 6 misinformation represents a 32 percent decline from a similar period last year.

By the numbers: NewsGuard reviewed the publication of election-related misinformation — including falsehoods about the integrity of the vote and about the Jan. 6 attack — during a 90-day period between Sept. 1 and Dec. 1, 2021.

One America News (OAN), a NewsGuard Red-rated, pro-Trump news channel, was a prominent source of misinformation about the election in 2020, including false claims about the integrity of election hardware and software company Dominion Voting Systems. (A federal lawsuit filed by the company against OAN in Washington is ongoing.)

Asked about OAN’s coverage of the 2020 election, including the article referenced above, Christina Bobb, the host of OAN’s “Weekly Briefing” show who has covered the Republican-run audit for the network, told NewsGuard in an email that “the Arizona Audit report outlines a number of questionable votes and practices” and provided a link to the Arizona Senate’s report on the effort.

Many sites included in NewsGuard’s Election Misinformation Tracker turned their focus in fall 2021 to the Republican-run audit in Maricopa County, Arizona, which ultimately found that U.S. President Joe Biden had indeed received more votes than former U.S. President Donald Trump and did not surface any evidence of widespread voter fraud that could have affected the outcome of the election. Still, a flurry of articles falsely claiming otherwise were published in the days following the release of the audit’s results in September 2021. NewsGuard found at least 24 articles with false claims about the audit between Sept. 1 and Dec. 1, 2021, from sites previously included on the Election Tracker.

The Gateway Pundit published an article by Joe Hoft, a contributing editor for the site and twin brother of The Gateway Pundit’s founder and editor, Jim Hoft, in response to an email NewsGuard sent to Jim Hoft inquiring about the story referenced above. The Gateway Pundit’s article stated: “Our country was founded on the belief that the winners of elections are to govern. When elections are stolen, the entire makeup of our country is destroyed. This is a very serious issue. We have been at the forefront in pointing out the many corrupt and criminal actions involved in the 2020 Election steal. The article in question was another piece in painting this complete picture of the obviously stolen election in 2020. This article was released the day after the results in Maricopa County were presented to the public.” 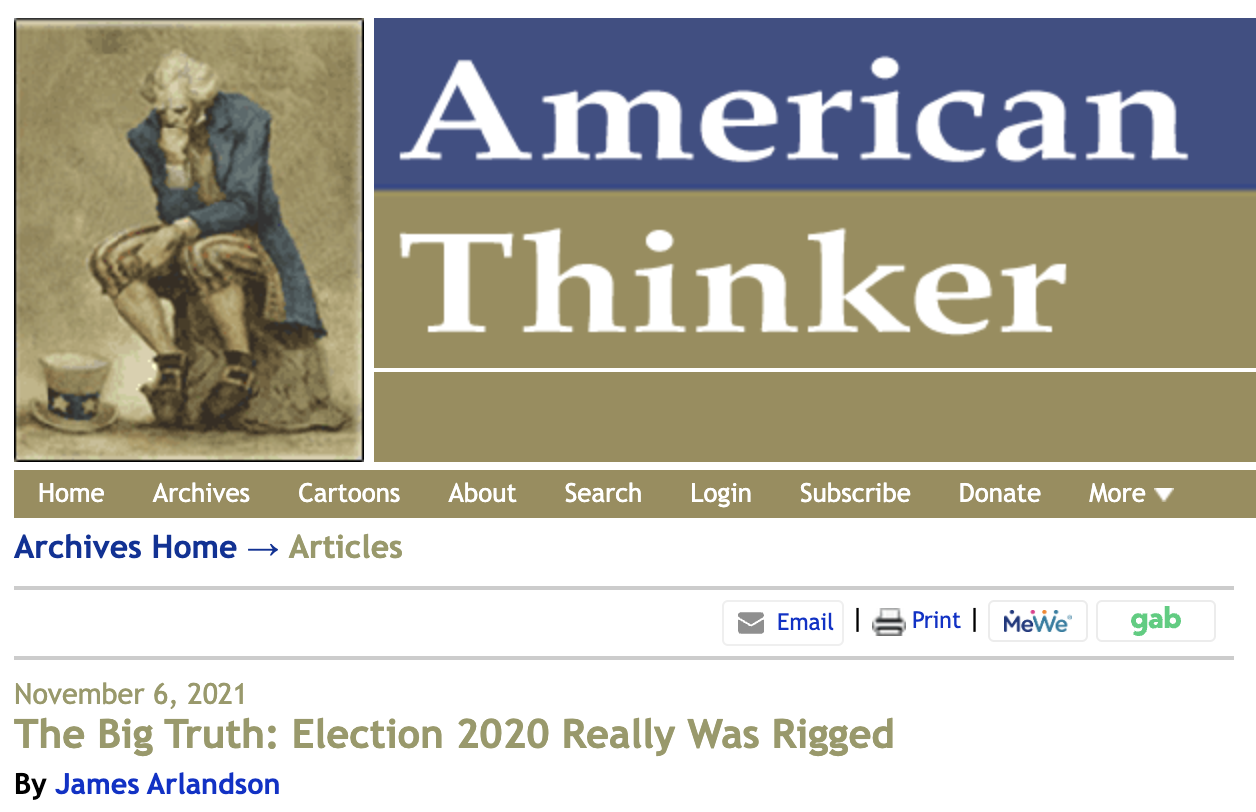 Red-rated AmericanThinker.com continued publishing stories with false claims about the 2020 election more than a year after it occurred. (Screenshot via NewsGuard)

Other websites focused on false claims that mail-in balloting, the use of which was expanded during the 2020 election due to the COVID-19 pandemic, can — and did — lead to widespread fraud.

A message NewsGuard sent through a general contact form on TheFederalistPapers.org and an email sent to Steve Straub, the site’s director and founder, inquiring about the article referenced above, went unanswered.

AmericanThinker.com, a NewsGuard Red-rated website that publishes conservative analysis and commentary on political and cultural issues, was another important source of false election claims in 2020. In early 2021, the site received some attention for a retraction notice apologizing to Dominion Voting Systems for what the site called its “completely false” claims about the company that had “no basis in fact.” But the site has shown no signs of dropping the broader false narrative that the 2020 election was illegitimate.

Breaking it down: AmericanThinker.com based this false assertion on the claim that “the Dems, with their allies in the lying media, unprecedentedly stopped the normal vote count” and “in the late hours illegally rammed through numerous lopsided ballots (a ‘surge’), favoring Basement Biden.” These claims have been thoroughly debunked by media outlets and government officials from both parties.

The enduring myth that Trump won the 2020 election — spread by AmericanThinker.com and other websites over the past year — has allowed other related falsehoods to flourish and has led to real-world consequences, including the Jan. 6, 2021 attack on the U.S. Capitol.

In an email to NewsGuard, American Thinker editor Thomas Lifson did not comment on the article cited above and included a link to the site’s retraction notice, also described above. 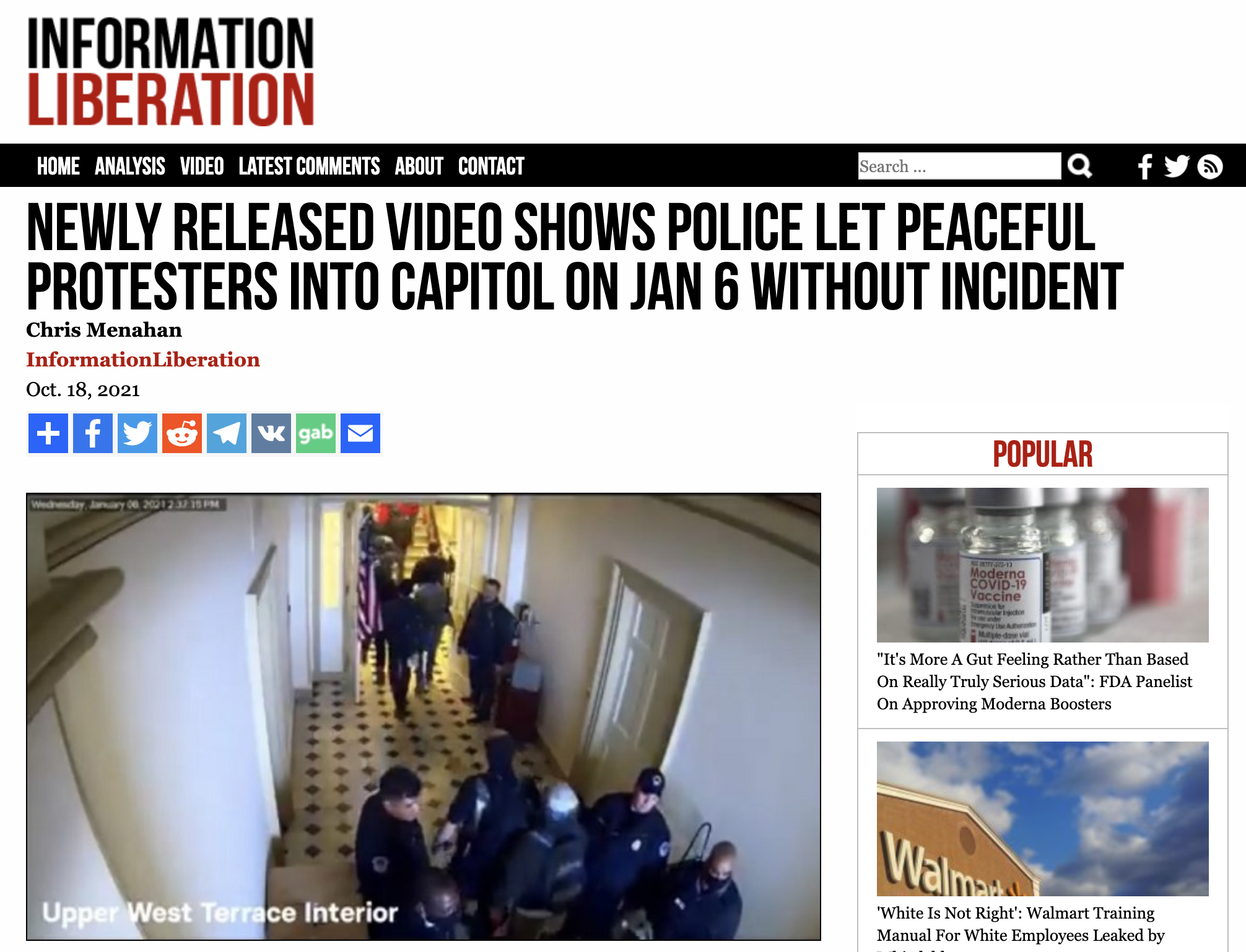 Red-rated websites like InformationLiberation.com published articles rewriting the history of the Jan. 6 attack on the Capitol, alleging that rioters were allowed into the building. (Screenshot via NewsGuard)
Get NewsGuard

NewsGuard also identified multiple articles that contained falsehoods about the events that unfolded on Jan. 6, 2021, during which rioters, some of whom were armed, stormed the U.S. Capitol during a session of Congress to certify the presidential election results for Biden. 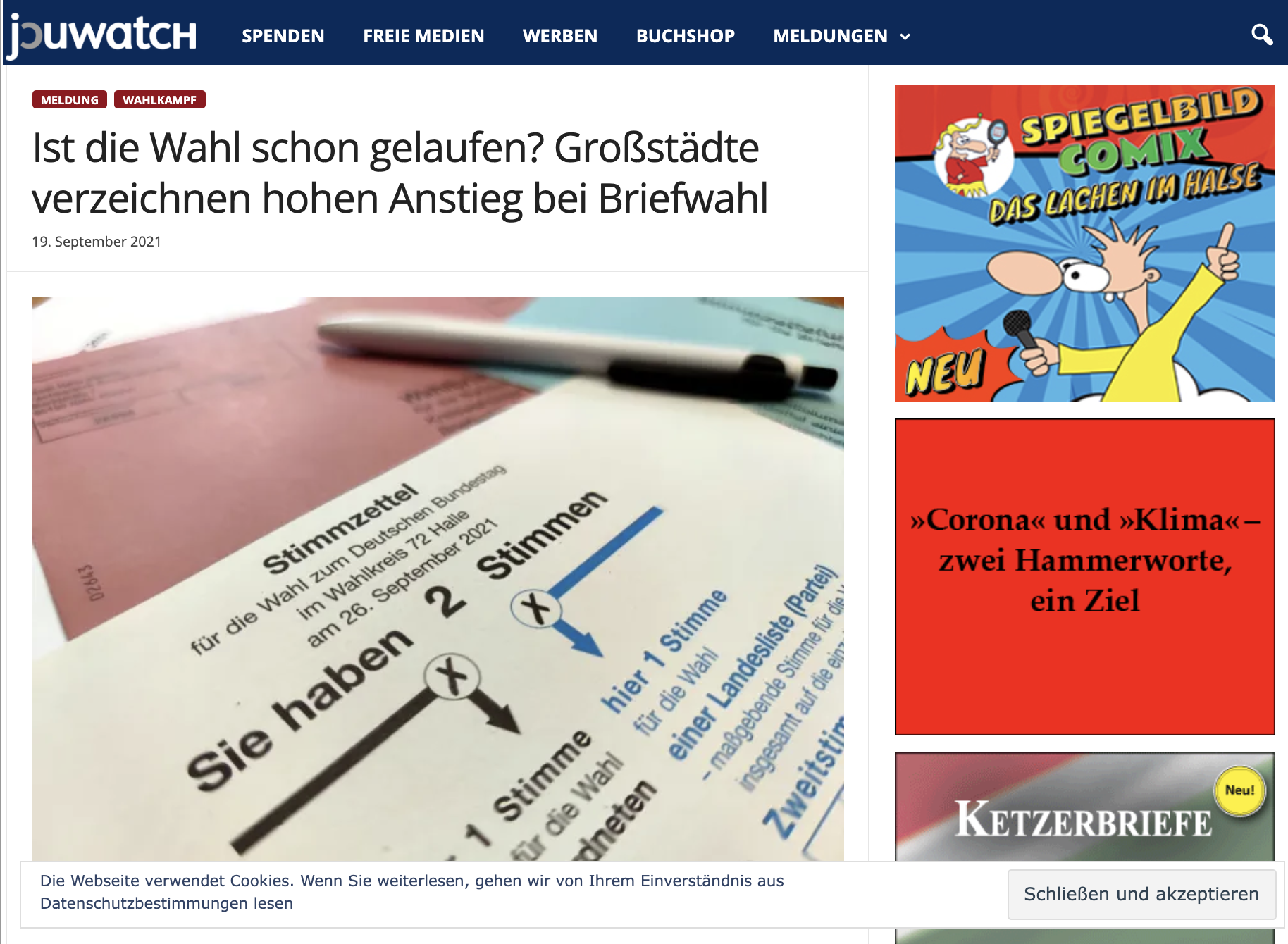 Red-rated German site JournalistenWatch.com made a direct link between the U.S. election in 2020 and the German election in 2021, stating that "it looks like the foundation for fraud has just been built here as well." (Screenshot via NewsGuard)

Europe and the U.K.

NewsGuard’s analysis found that myths about the 2020 election and the Jan. 6 attack were not unique to the U.S. While a smaller share of European sites from the Election Tracker were sharing misinformation during the year that followed, it is clear that narratives from the U.S. have been exported to websites elsewhere that are well known to lack credibility.

The bottom line: Considering that the proliferation of false election claims showed no sign of slowing down in 2021, there is little reason to think that the trend will stop going into the next election cycle. Indeed, with the anniversary of the Jan. 6 riot approaching, NewsGuard Red-rated sites can be expected to double-down on a false narrative that sows doubt about election integrity and calls into question the foundations of democracy in the U.S. and abroad.