Photo by Element5 Digital from Pexels

As purveyors of mis- and disinformation related to the 2020 elections have turned their attention to a partisan audit of ballots in Maricopa County, Arizona, one website has played an outsized role in promoting the story and spreading related false claims — The Gateway Pundit.

According to NewsGuard’s analysis of data from NewsWhip, a social media intelligence company, The Gateway Pundit — a Red-rated (meaning generally unreliable) conservative news and commentary website with a history of advancing false claims — has published 263 articles about the audit of Maricopa County election results between when U.S. President Joe Biden took office on Jan. 20, 2021, and June 20, 2021, making it the most prolific online publisher promoting the Arizona audit.

The audit, which was authorized by the Republican-controlled state Senate, has reviewed the county’s approximately 2.1 million ballots and is reportedly entering its final stages. The effort is widely seen as partisan and aimed at sowing doubts about the election results, echoing former U.S. President Donald Trump’s false claims that the election was marred by massive fraud. Earlier official hand count and electronic equipment audits found no evidence of fraud or vote switching in Maricopa County.

By the numbers: According to NewsWhip data, The Gateway Pundit’s articles have received significant social media engagement and sparked further coverage by other outlets, including by other Red-rated sites.

Breaking it down: The Gateway Pundit has published a wide variety of falsehoods about the Arizona audit, and the substance of those articles has been frequently spread and further amplified by other sites. 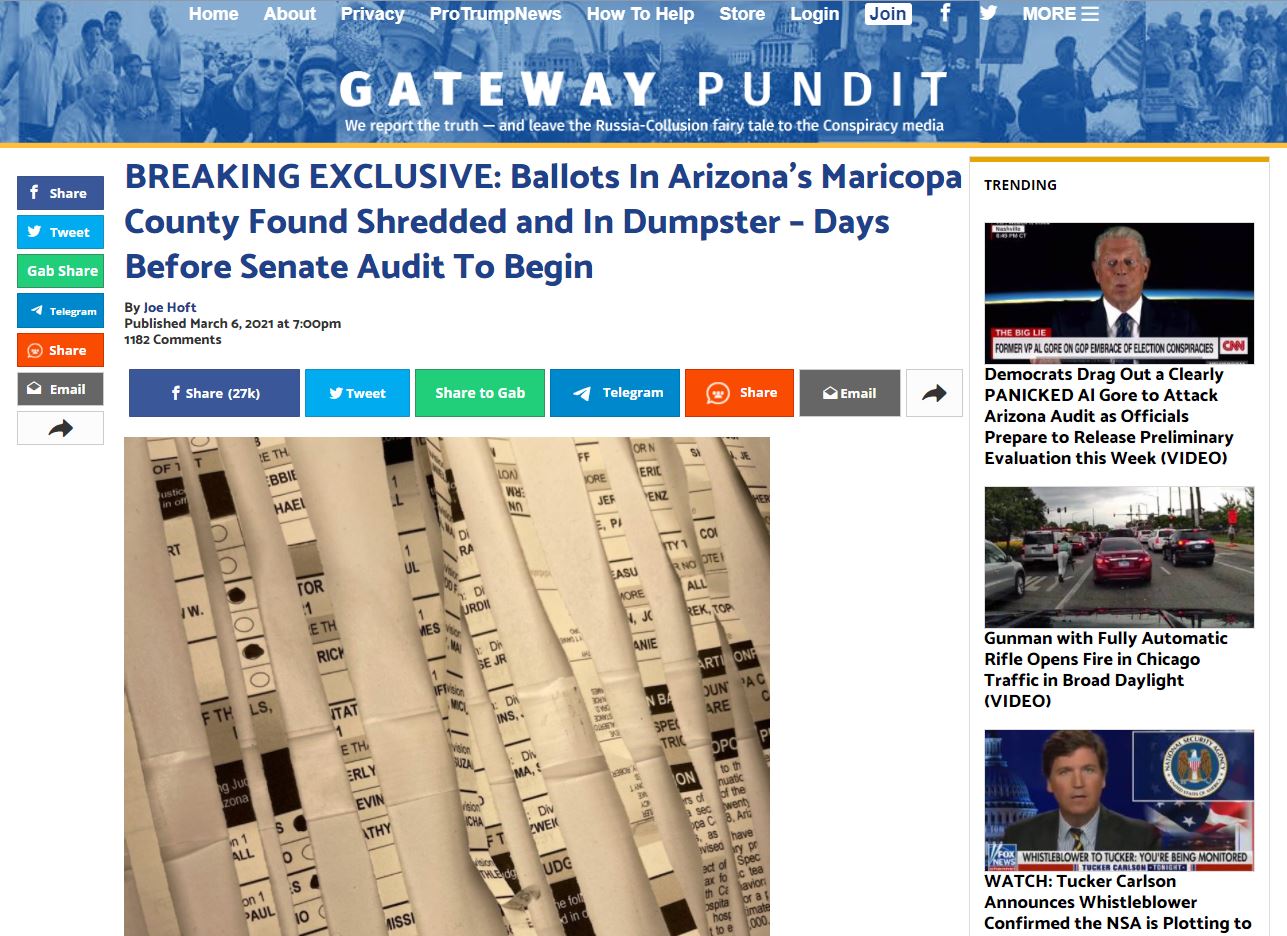 The Gateway Pundit, a conservative news and commentary website with a history of advancing false claims, has been the most prolific online publisher promoting the election audit in Arizona's Maricopa County. (Screenshot via NewsGuard)
Get the Misinformation Monitor in your Inbox

‘Deleted Files’: On May 12, 2021, The Gateway Pundit published an article (originally published by 100PercentFedUp.com, another Red-rated site) whose headline falsely claimed, “Maricopa County Elections Officials DELETED ENTIRE DATABASE DIRECTORY from Voting Machines.” Citing a letter that Arizona Senate President Karen Fann wrote to Maricopa County’s Board of Supervisors Chairman Jack Sellers, the article stated: “On Wednesday afternoon, it was discovered that ‘the entire database’ showing the ‘Results Tally and Reporting’ for the 2020 election had been deleted from the Maricopa County voting machines!”

The Gateway Pundit was founded in St. Louis in 2004 by conservative blogger Jim Hoft. It has promoted myriad other false claims and debunked conspiracy theories, including that former U.S. President Bill Clinton and his wife, former Secretary of State Hillary Clinton, can be linked to the deaths of more than 40 people, and that students who spoke out in favor of gun control after the February 2018 mass shooting at a Parkland, Florida, high school had staged their responses.

NewsGuard sent founder and editor Hoft three emails inquiring about the site’s coverage of the audit, but did not receive a response.

Why we should care: Misinformation about the Arizona audit, which perpetuates the myth that the 2020 election was rigged, can sow distrust in the democratic process and weaken the foundations of government. Plus, all the falsehoods being published about the “discoveries” of fraud in Arizona have now given other states controlled by disappointed followers of President Trump the idea to pursue their own partisan audits.