As COVID-19 spreads around the world, NewsGuard has been tracking the top hoaxes about the pandemic that are spreading on the internet—and the dozens of websites that are publishing those false stories.

Today, we’re adding to our data a new set of data focused not on individual websites or false stories, but on the Twitter accounts that repeat, share, and amplify these myths in France, Italy, and Germany.

The following list focuses on Twitter accounts with large follower counts — 20,000 or more followers — who have shared links with false information from websites that NewsGuard has rated Red, meaning they were found to be generally unreliable sources of news, or who have shared other COVID-19 misinformation reviewed by NewsGuard.

In this data set, we have identified 16 Twitter accounts that are “Super-spreaders” of COVID-19 misinformation, meaning they have large follower counts. Combined, these accounts reach about 616,600 followers, who, of course, can then spread them on their own social media accounts.

Each example of COVID-19 misinformation found by NewsGuard comes after Twitter’s March 18 announced efforts to address the issue. These large Super-spreader accounts — again, all with over 20,000 followers — have continued to be able to use Twitter to publish blatant misinformation about the pandemic after that date. In two cases (one in France and one in Germany), the accounts have been verified by Twitter, meaning only that the identity of the account holder has been confirmed but that could look to users as if Twitter has verified the account and its content more fully.

In many cases, the accounts have previously spread misinformation about other subjects. For example, the Twitter account of the German site Compact-Magazin has promoted 9/11 conspiracies; the Twitter account of Italian site ByoBlu.com shared articles promoting false claims about a connection between vaccines and autism; and the Twitter account of French far-right website Egalite Et Reconciliation has shared disinformation about the civil war in Syria. All three of these sites had already been rated Red by NewsGuard, meaning that NewsGuard’s Red warning icon would have been visible to those having access to NewsGuard’s browser extension along with these COVID-19 hoaxes the moment the hoax was posted.

In the past, Twitter has cited its efforts to protect users from content coming from sites that have violated its terms of service, which include posting claims about COVID-19 involving false cures. On May 11, Twitter also announced it would add labels and warning messages on some tweets spreading misleading information about the virus.

However, those efforts — which the list below demonstrates have not worked — are inherently less effective, even if they could achieve scale, than “pre-bunking” unreliable sources by warning users in advance of the unreliability of these sources. Pre-bunking has allowed NewsGuard to review and rate approximately 95% of all news and information website articles that are shared on Twitter in the countries where NewsGuard operates.

A Twitter spokesperson did not respond to a request for comment on these accounts and the COVID-19 misinformation they have shared.

To qualify as Super-spreaders, Twitter accounts we have included here had to meet three simple criteria:

Our analysts derived this list in part by tracing which Twitter accounts had linked to false stories on websites from our COVID-19 misinformation tracker. This data was supplemented with additional research and reporting.

Again, this list is a work in progress. The accounts listed may not be the most frequent offenders or be the publishers of false COVID-19 misinformation with the largest audiences. And the examples we list for each account do not necessarily represent an exhaustive list of all the times the account published COVID-19 misinformation.

If you are aware of another account that meets these criteria, please report it here and our team will review it.

Scroll down for a list of some of the most egregious examples of misinformation “Super-spreaders” we’ve found so far.

The Twitter account of far-right essayist Alain Soral, who was convicted multiple times for making anti-Semitic slurs and for engaging in Holocaust denial. The account, created in 2012, often shares links to articles published on EgaliteEtReconciliation.fr (EqualityAndReconciliation in French), a Red-rated website created by Soral that often publishes false claims and conspiracy theories.

The verified Twitter account of French professional wrestler Tom La Ruffa, who tweets in English and French and shares wrestling videos as well as comments about the news, including on the alleged health hazards of 5G technology. 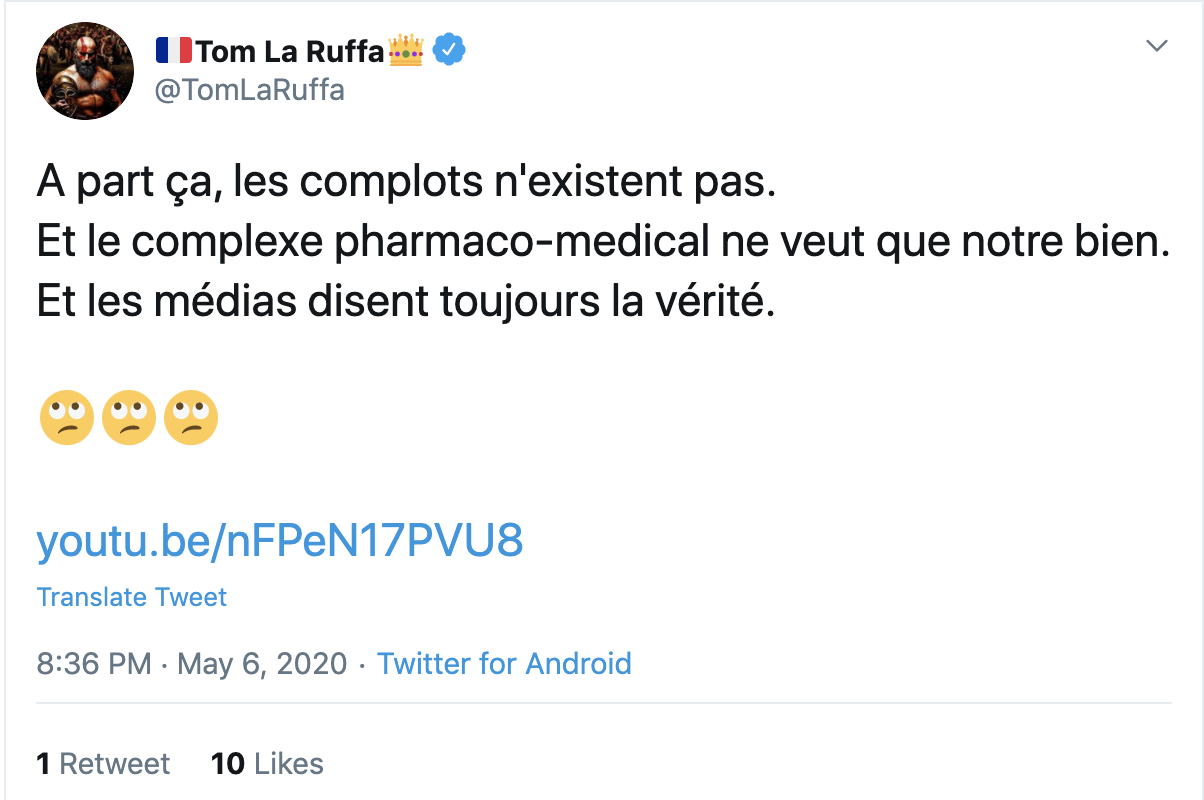 Asked about the above tweet, Tom La Ruffa told NewsGuard in a Twitter message: “With this recent Covid19 crisis, we often notice that scientists are contradicting one another. Even the WHO (World Health Organization) was mistaken in the last few months in several of its analyses or predictions, including at the beginning of this pandemic, when it underestimated its severity, and even delayed revealing certain pieces of information to the international community.” When he published this tweet, “the ‘Plandemic’ video was still available on YouTube and already neared 2 million views at the time,” he wrote, adding, “My sharing of it was therefore completely justified.” (Editor’s Note: To read La Ruffa’s full response to NewsGuard, please click here).

The Twitter account of author and blogger Pierre Jovanovic, who mostly retweets news about the French government, and has retweeted articles from websites that NewsGuard has found to be unreliable, including EgaliteEtReconciliation.fr and TVLibertes.com. 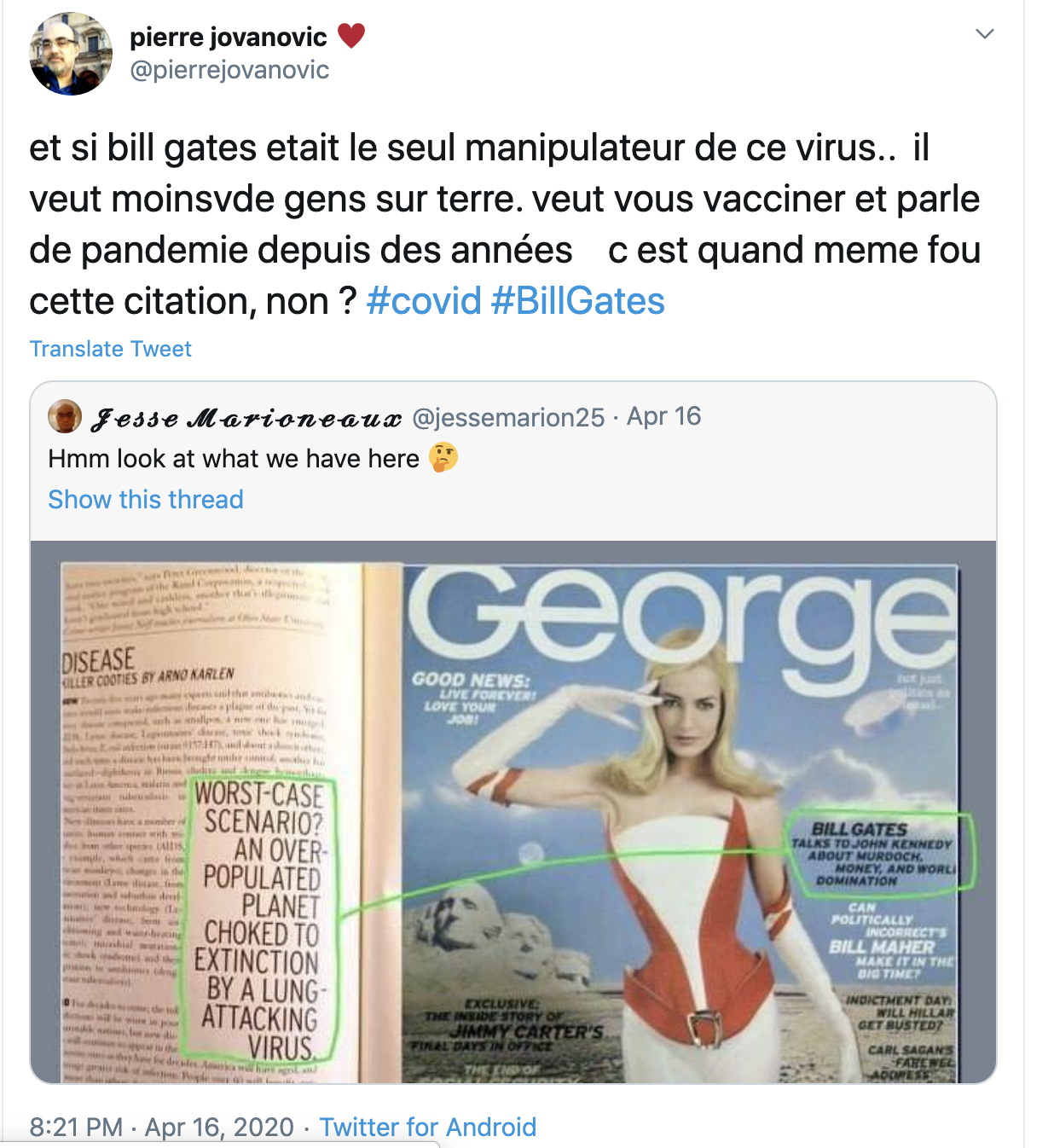 The Twitter account of Red-rated and far-right website EgaliteEtReconciliation.fr, which often publishes false claims and conspiracy theories and whose founder Alain Soral was convicted multiple times for making anti-Semitic slurs and for engaging in Holocaust denial.

Alain Soral, the website’s founder, did not respond to a message from NewsGuard sent through a contact form on EgaliteEtReconciliation.fr, seeking comment about the above posts.

A Twitter account created in 2017 that describes itself as a media “for those resisting unhappy globalization.” L’Info Libre means The Free News in French. 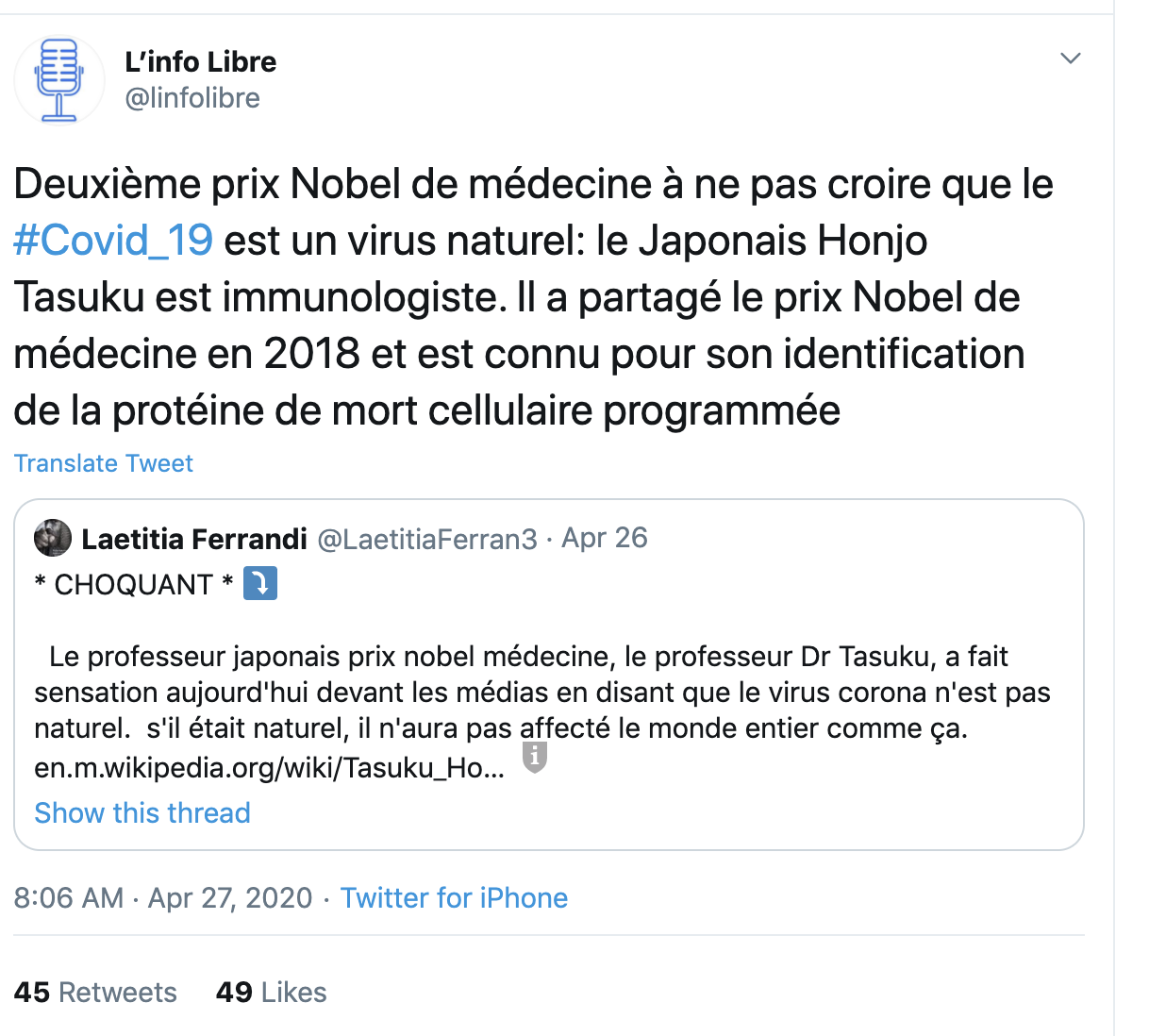 The Twitter account of Red-rated conspiracy website LeLibrePenseur.org (which means The Free Thinker in French) and Marseille-based Franco-Algerian Youtuber Salim Laïbi, who describes himself as a “dental surgeon, whistleblower, editor and writer.” This account, created in 2011, has shared misinformation on other topics, including vaccines.

Asked about the above posts in a Twitter message, @LLP_Le_Vrai did not directly address NewsGuard’s comments. Instead, the sender provided a link to another article from LeLibrePenseur.org, relating to a France 24 interview with Taiwan vice-president Chen Chien-jen, in which he called for a “scientific investigation” to determine the origins of the virus. Previously asked by NewsGuard about posts on its Facebook page and about its editorial practices, the website declined to comment.

The Twitter account of a medical doctor based in Poitiers, who states in his bio that he “believes that all peoples deserve their own identity.” “To dilute it = real racism,” his bio states. The account was created in 2013. 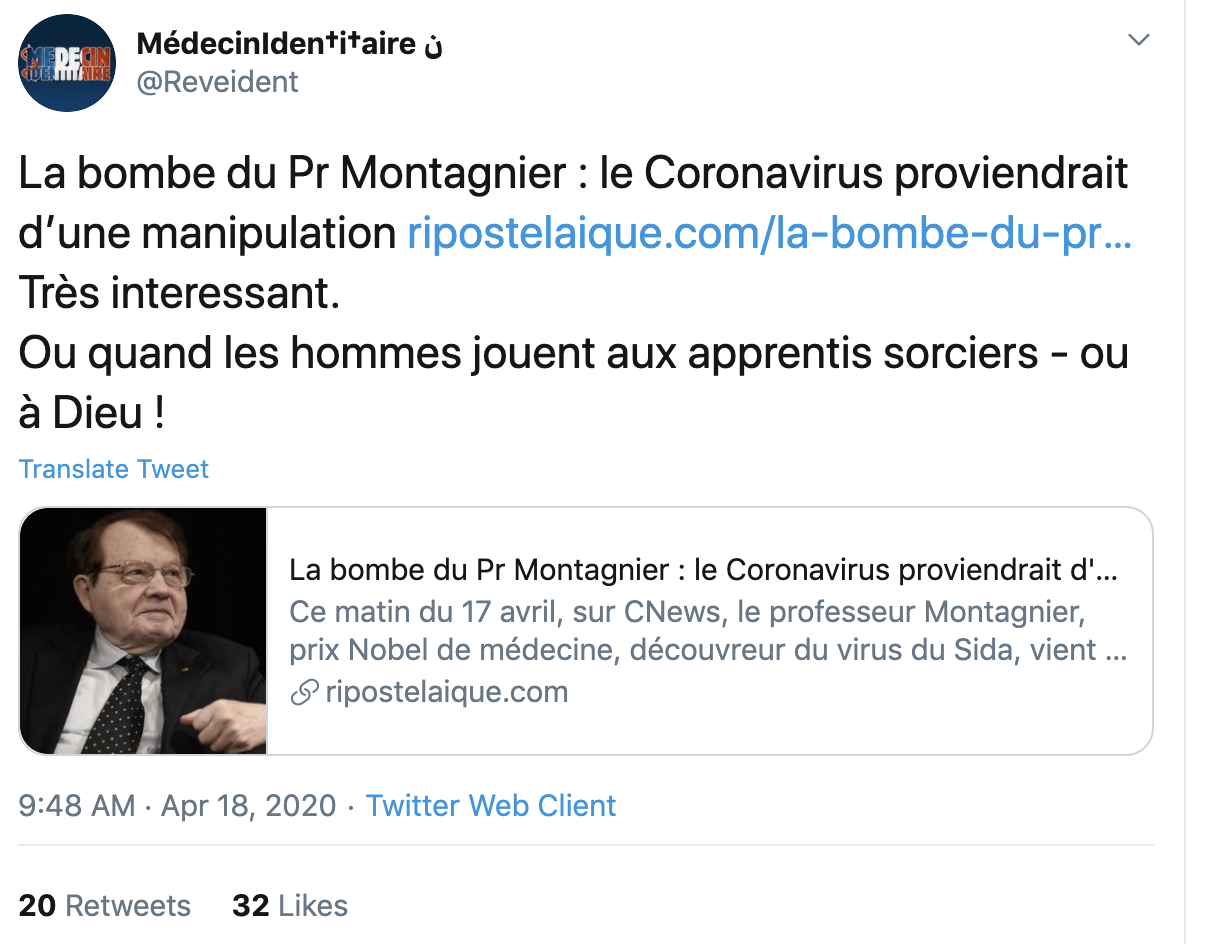 In a Twitter message to NewsGuard, @Reveident wrote: “What seemed obvious to me since the beginning of the pandemic was the unlikelihood of a spontaneous mutation of a virus whose epicenter was a city that, surprise surprise, is home to a world level research laboratory on viruses. I personally think there was an accidental leak from the laboratory. I always find it useful not to overlook any lead, and to read opinions that are different from mine…. Remember that the fake news of today might be the real news of tomorrow.”

The Twitter account of Alessandro Meluzzi, who describes himself in his Twitter bio as a “psychiatrist, psychologist, psychotherapist, criminologist. Forensic Psychiatry Professor. Primate of the Ancient Eastern Autocephalous Italian Orthodox Church.” Meluzzi is a former Member of Parliament from the center-right party Forza Italia.

Asked about the above posts, Meluzzi’s administrative office told NewsGuard in an email: “Meluzzi thought the content of these tweets was an interesting topic for a debate.”

ByoBlu.com did not respond to a message from NewsGuard sent through a contact form on the site, seeking comment about the posts mentioned above.

The Twitter account of  Patrizia Rametta, who has served as regional coordinator of right-wing The League party in Sicily. 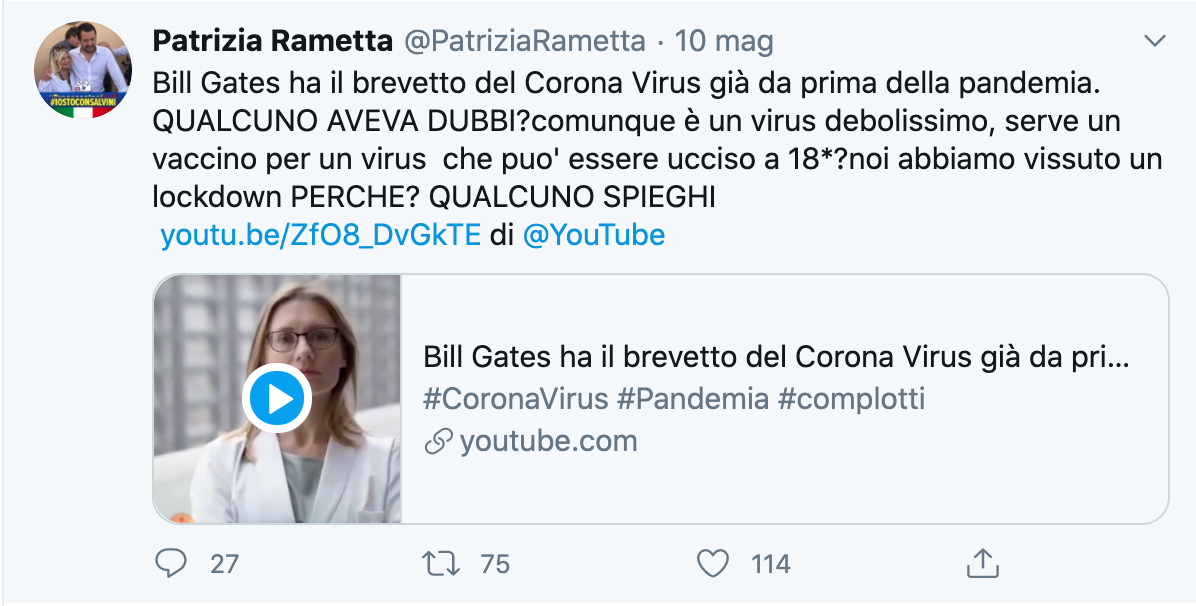 Asked about these false claims, Cesare Sacchetti told NewsGuard in a Twitter message: “In the articles published on my site there are links to the sources that attest to what is reported there. These tweets refer precisely to those articles where news and facts are reported with attached sources.”

Commenting on the April 23 tweet, Sacchetti said: “Just for the record, also a Nobel Prize [winner], Montagnier, and other scientists claimed that the virus was created in a laboratory.”

About the May 4 tweet, Sacchetti said: “The digital vaccine does exist and it has already been administered in Texas. It is not clear to me what you are contesting me about this tweet.”
Regarding the May 5 tweet in which he stated that “African children who received Bill Gates’ vaccines either died or became epileptic,” Sacchetti said: “If you want the source of the damage that vaccines have done in Africa, I recommend this study.” He provided a link to a study examining the effects of the introduction of diphtheria-tetanus-pertussis (DTP) and oral polio vaccine (OPV) in an urban community in Guinea-Bissau in the early 1980s. The study concluded that “DTP was associated with increased mortality.” 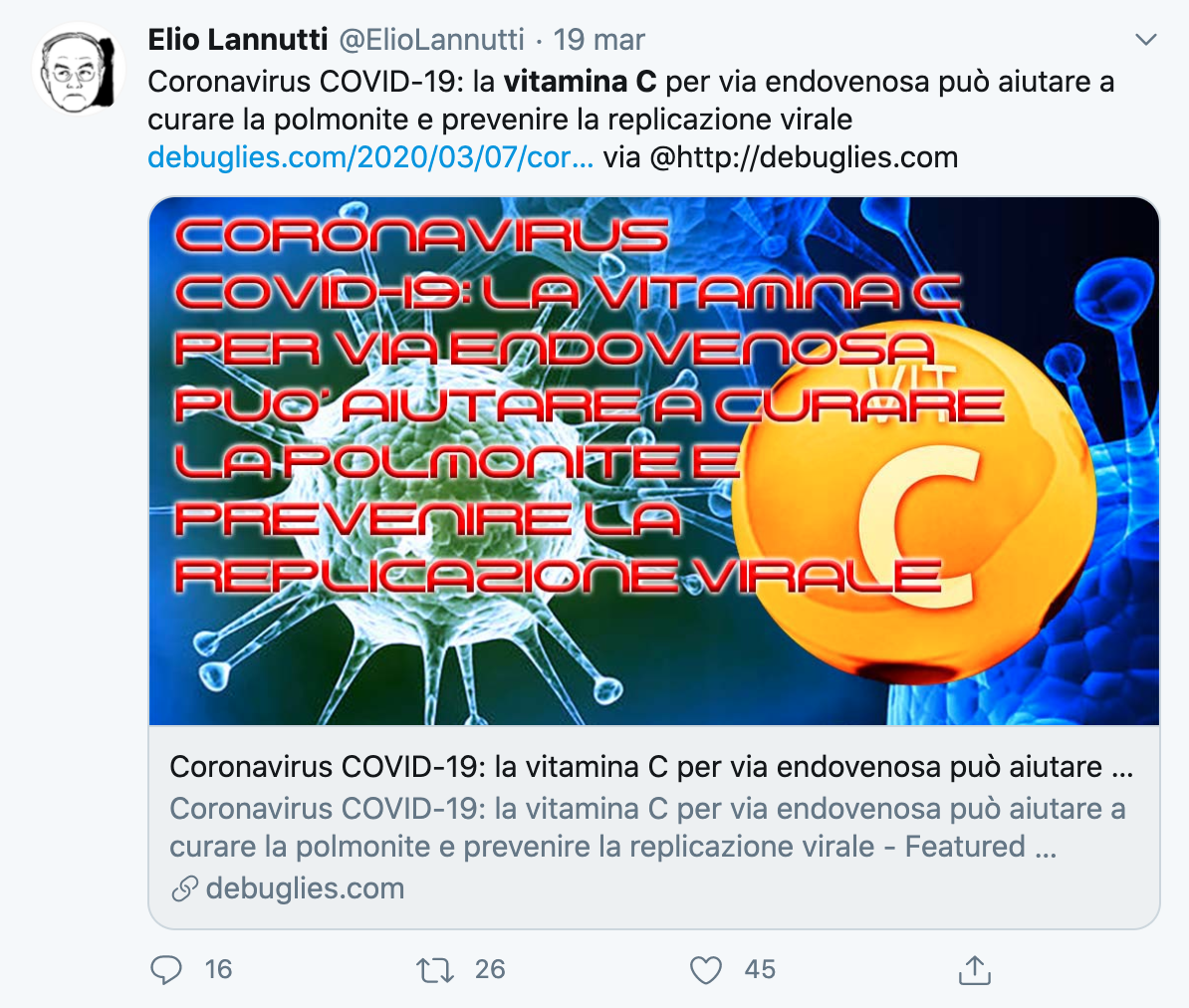 A Twitter account associated with the Red-rated site RT Deutsch, a Russian government disinformation and propaganda news outlet previously known as Russia Today. The account was created in June 2014. 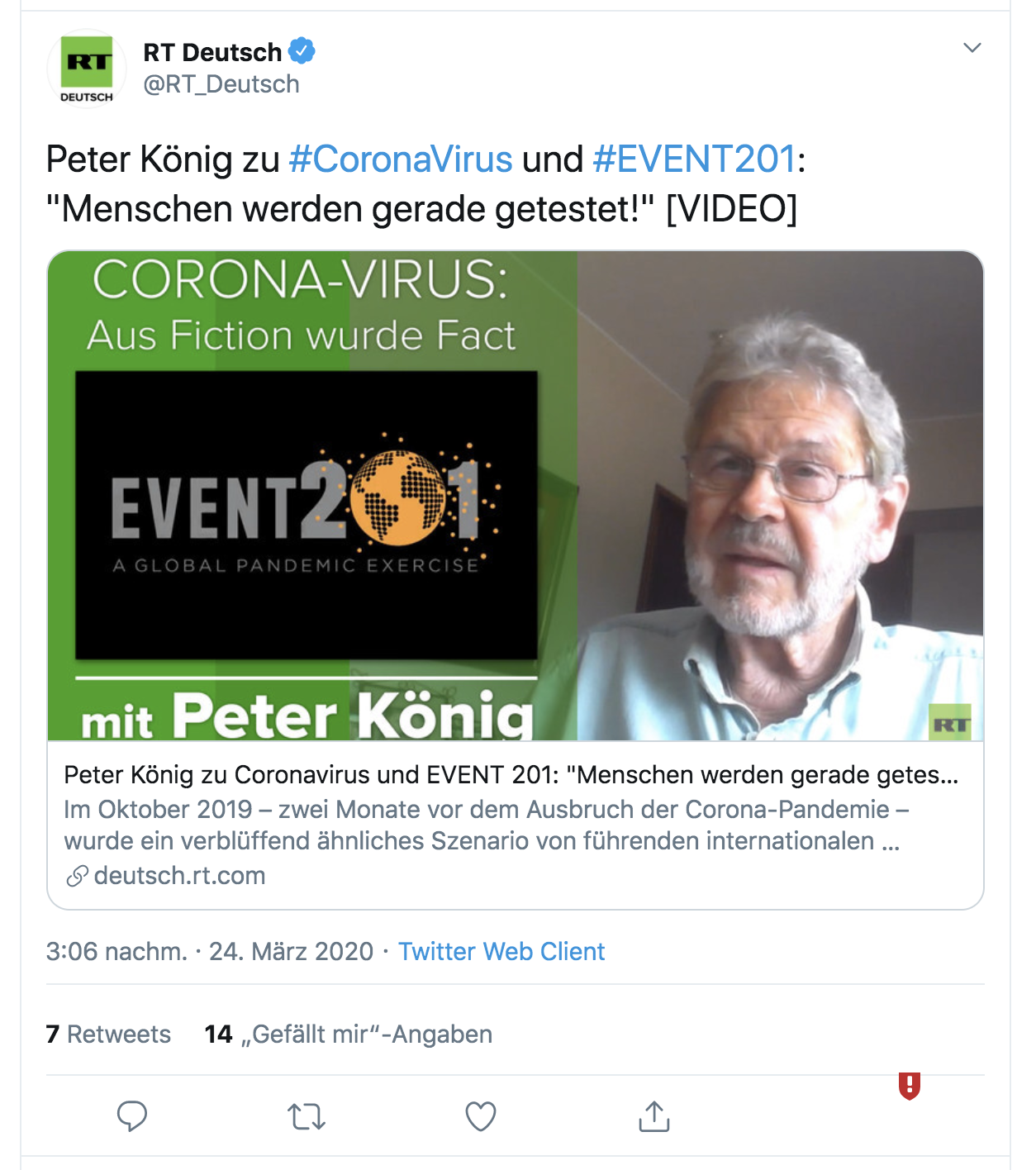 Asked about this false COVID-19 claim, an RT Deutsch representative, Sebastian Range, told NewsGuard in an email: “As you have correctly pointed out, this is an interview. This statement is the personal opinion of Mr. König (‘in my opinion’) and not that of our network. Such a distinction should be obvious from a journalistic point of view.” 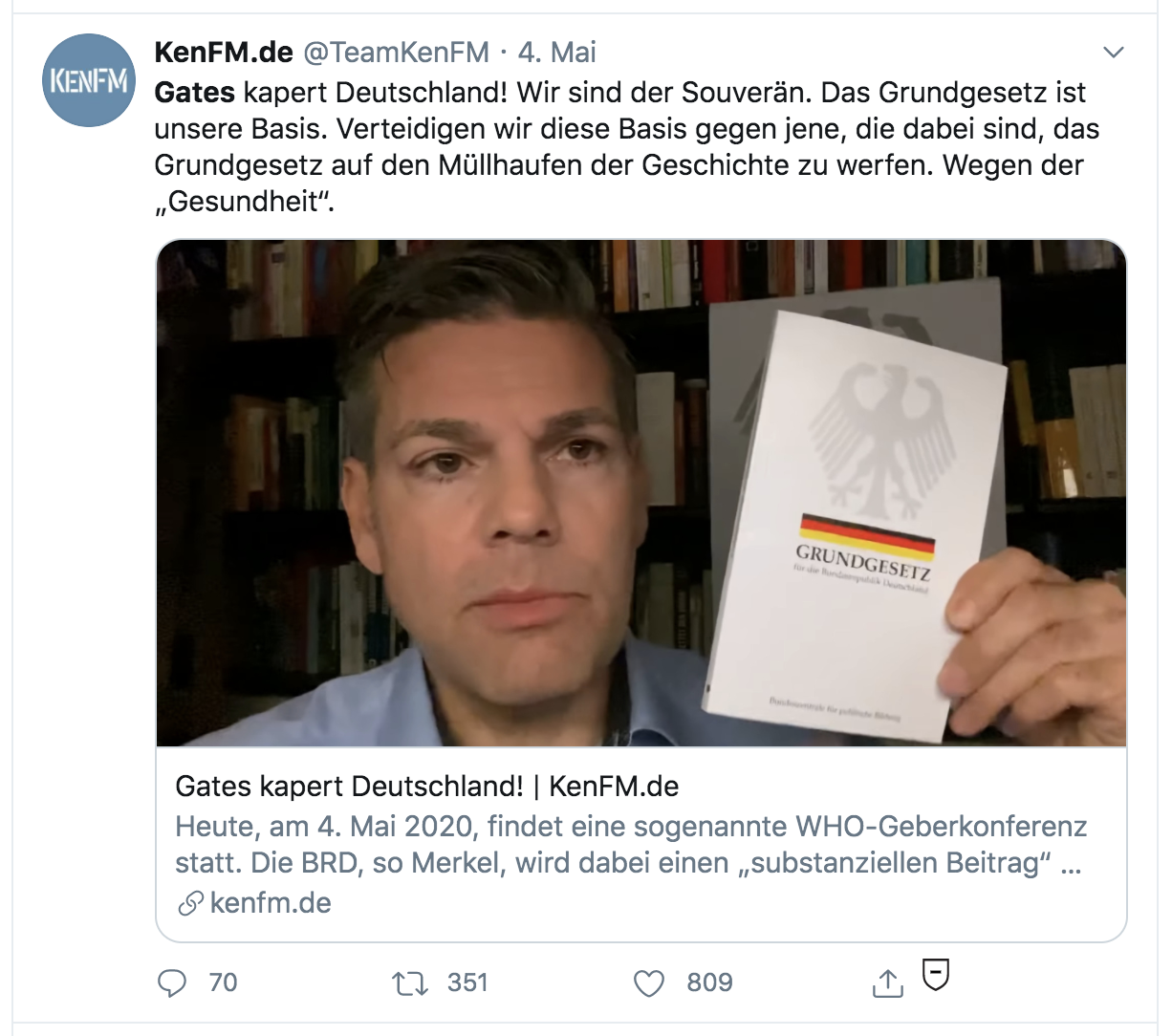 NewsGuard sent an email to KenFM.de seeking comment on the false claims about COVID-19, but did not receive a response.

An account associated with the Red-rated website of Compact, a monthly German magazine that advances the views of the right-wing AfD party and that promotes Russian disinformation. Created in March 2014, the account primarily posts articles from Compact-Online.de. 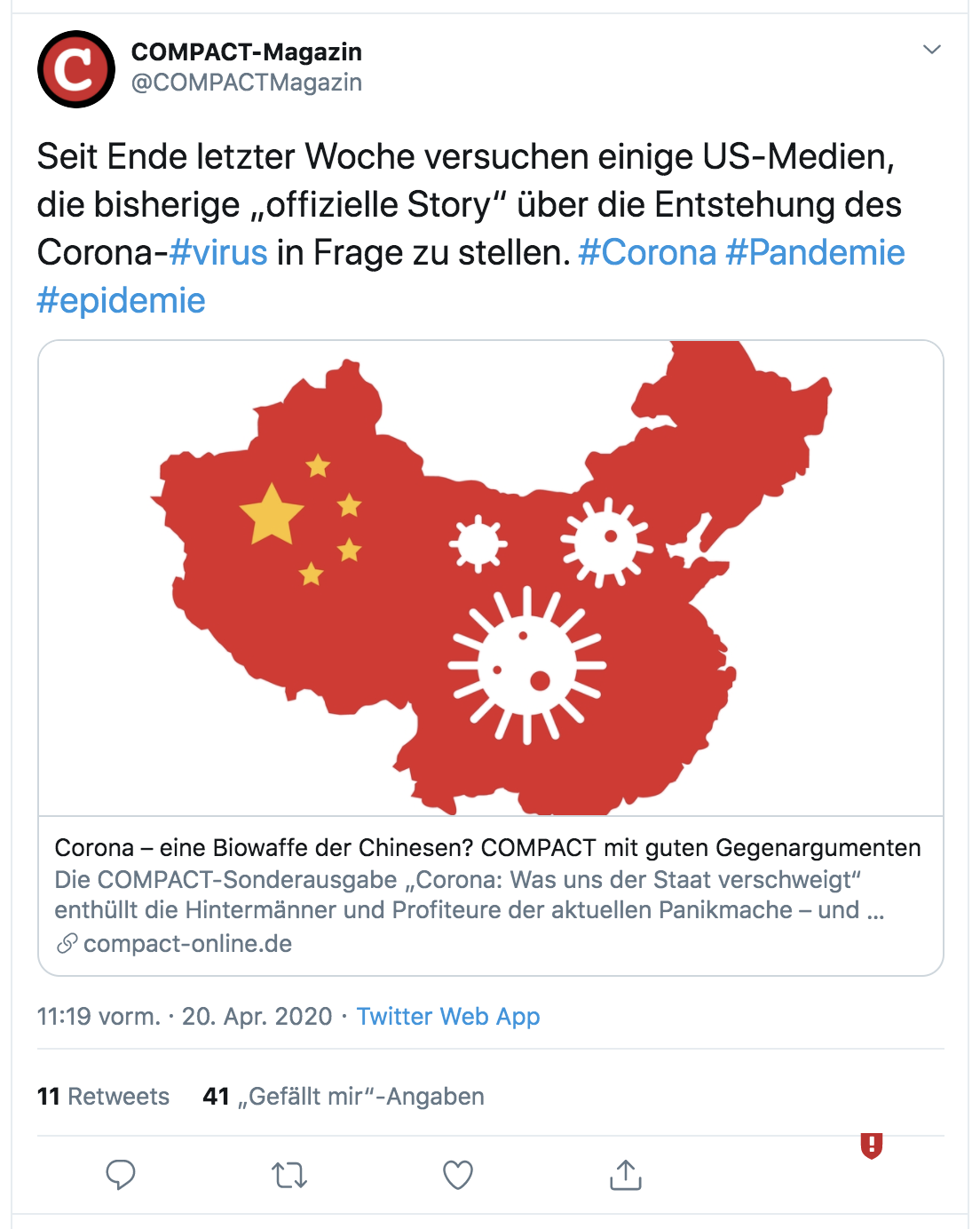 NewsGuard sent an email to Compact-Online seeking comment on the false claim about COVID-19, but did not receive a response.

A pro-Russian and pro-Trump account that frequently shares articles, videos, and photos about conspiracy theories, including QAnon and “Obamagate,” a conspiracy theory being advanced by U.S. President Donald Trump and his supporters related to unspecified claims of wrongdoing by the Obama administration. The account was created  in April 2014.

NewsGuard was unable to confirm the identity of the owner of this account and could not reach out for comment, since the account does not accept direct messages.